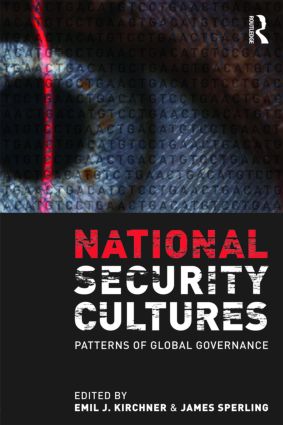 Tracing the links between national security cultures and preferred forms of security governance the work provides a systematic account of perceived security threats and the preferred methods of response with individual chapters on Canada, China, France, Germany, Italy, Japan, Mexico, Russia, UK and USA. Each chapter is written to a common template exploring the role of national security cultures in shaping national responses to the four domains of security governance: prevention, assurance, protection and compellence. The volume provides an analytically coherent framework evaluating whether cooperation in security governance is likely to increase among major states, and if so, the extent to which this will follow either regional or global arrangements.

By combining a theoretical framework with strong comparative case studies this volume contributes to the ongoing reconceptualization of security and definition of threat and provides a basis for reaching tentative conclusions about the prospects for global and regional security governance in the early 21st century. This makes it ideal reading for all students and policymakers with an interest in global security and comparative foreign and security policy.

The result of empirical research conducted by an impressive international team of scholars, this is a rigorous and systematic examination of national security cultures across a wide swath of the world. The authors follow a common framework in an exemplary collaborative project which reveals important insights into the fundamental question of the relationship between culture and security policy and the extent to which security concepts in the West can be transferred to other regions. - Stephen F. Szabo, Executive Director of the Transatlantic Academy, USA

Emil Kirchner and James Sperling have produced a welcome addition to the literature on national security cultures by applying the concept to the pressing problem of global and regional security governance.Country experts, area specialists, and international relations theorists with an interest in these topics will all want to consult this volume. - John S. Duffield Professor of Political Science Georgia State University, USA

Interest in security governance has risen and fallen in the past ten years; now again on the rise, the concept is in great need of theoretical exposition and empirical grounding; and that is what this book achieves. In a welcome and highly ambitious study, the focus on security governance - so often constrained to Europe - is examined globally. In all these contexts, it is an exceptionally important book. - Stuart Croft, Professor of International Security, Warwick University. UK

'The collection of essays and the book’s overarching framework make a positive and rich contribution to the international debate on security cultures, strategies and policies.' - The International Spectator, Vol. 46, No. 1 (March 2011), 161