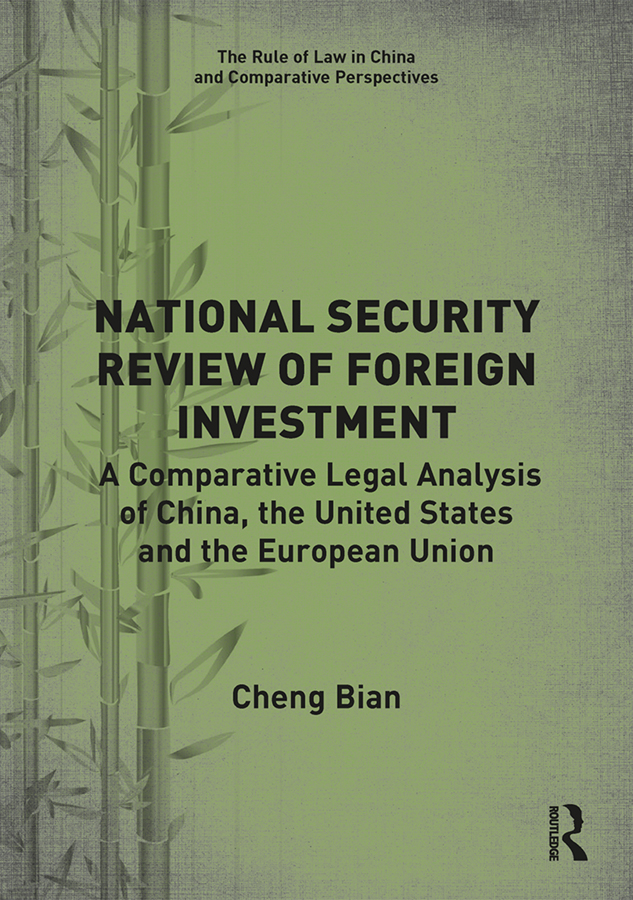 A Comparative Legal Analysis of China, the United States and the European Union, 1st Edition

In recent years, China, the US, and the EU and its Member States have either promulgated new national laws and regulations or drastically revised existing ones to exert more rigorous government control over inward foreign direct investment (FDI). Such government control concerns the establishment of an ex-ante review regime of FDI in the host state in sectors that are considered as ‘sensitive’ or ‘strategic’, with an aim to mitigate the security-related implications. This monograph conducts a systematic and up-to-date comparative study of the national security review regimes of China, the US, and the EU, using Germany as an exampling Member State. It answers a central research question of how domestic law should be formulated to adequately protect national security of the host state whilst posing minimum negative impacts to the free flow of cross-border investment. In addition to discussing the latest development of the national security review regimes in aforementioned jurisdictions and identifying their commonalities and disparities, this monograph establishes a normative framework regarding the design of a national security review regime in general and proposes specific legislative recommendations to further clarify the law.

This book will be of interest to scholars in the field of international and comparative investment law, investors who seek better compliance programs in the host state, and policymakers who aim for high-quality regulation on foreign investment.

PART I ESTABLISHING A NORMATIVE FRAMEWORK;

Chapter 2 The Conceptualization of National Security;

Chapter 3 The Jurisprudential Foundation of National Security Review of FDI;

Chapter 6 The National Security Review Regime of the US;

Chapter 7 The National Security Review Regime in the EU;

Chapter 8 Revealing the Similarities and Differences;

Chapter 9 An Evaluation to the Comparative Results;

The Rule of Law in China and Comparative Perspectives

The Rule of Law in China and Comparative Perspectives

There is no doctrine more effective than the rule of law in portraying the complex transformation of Chinese society from the rule of men towards the rule of law - a process inaugurated in post-Mao China which is continuing to advance legal reforms to the present day. In other parts of the world, striving for the rule of law is also evident: countries in transition face a similar mission, while the developed democratic countries are forced to tackle new challenges in retaining the high benchmark of the rule of law that has been established.

Research on the legal system in China and in comparison with other countries in the framework of the rule of law covers broad topics of public and private law, substantive law and procedural law, citizens’ rights and law enforcement by courts. Based on this broad understanding of the rule of law, the series presents international scholarly work on modern Chinese law including: comparative perspectives, interdisciplinary, and empirical studies.