National Security and Policy in America
Immigrants, Crime, and the Securitization of the Border 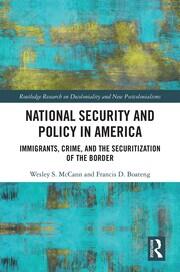 National Security and Policy in America: Immigrants, Crime, and the Securitization of the Border

critically explores how American culture, neocolonial aspirations, and indifference towards others negatively impact long-term global security. This book examines immigration and security policies and their origins, purpose, impact, and evolution vis-à-vis the recently imposed ‘travel ban’ and proposed border wall across the Southern border, as well as how foreign policy influenced many of the migration flows that are often labeled as security risks. The book also seeks to understand why immigration has been falsely associated with crime, terrorism, and national insecurity, giving rise to counterproductive policies, despite evidence that immigrants face intolerance and turmoil due to the powerful distinctions between them and the native-born.

This book uses an interdisciplinary framework in examining the U.S.’ current response to immigration and security and will thus appeal to undergraduate and graduate students of law, social justice, criminology, critical theory, neo-colonialism, security studies, policing, migration, and political science, as well as those interested in the practical questions of public administration.

Part I: Securitization Through the Convergence of Systems (1798-Present); 1. The Evolution of American Immigration Policy (1798-1945); 2. Securitization in the Age of Expansion (1945-1991); 3. The Post-Cold War Era (1991-Present); Part II: Case Studies 4. The Travel Ban; 5. Terrorism, Immigration, and the Border Wall; 6. Immigration as a Consequence of Foreign Policy in the Labyrinth of ‘Wars’; Conclusion 7. Towards a Global Security; Index

Wesley S. McCann is a Visiting Assistant Professor of Criminology at The College of New Jersey. He has published numerous articles dealing with criminal law and procedure and terrorism, and his current research focuses on issues concerning hate crime and terrorism legislation, the immigrant–crime relationship, and immigration law and policy.

Francis D. Boateng is an Assistant Professor of Criminal Justice and Legal Studies at The University of Mississippi. He has published numerous articles dealing with policing and comparative issues, and his current research focuses on issues concerning immigration, terrorism, victimization, comparative criminology, crime, and church security.