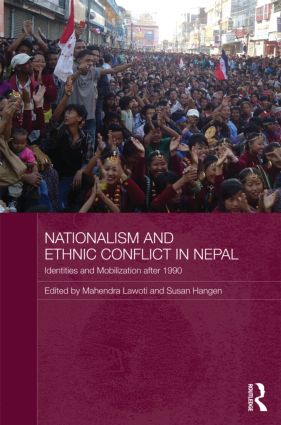 Nationalism and Ethnic Conflict in Nepal

Identities and Mobilization after 1990, 1st Edition

Identity movements, based on ethnicity, caste, language, religion and regional identity, have become increasingly significant in Nepal, reshaping debates on the definition of the nation, nationalism and the structure of the state. This book analyzes the rapid rise in ethnic and nationalist mobilization and conflict since 1990, the dynamics and trajectories of these movements, and their consequences for Nepal.

From an interdisciplinary perspective, the book looks at the roots of mobilization and conflicts, the reasons for the increase in mobilization and violent activities, and the political and social effects of the movements. It provides a historical context for these movements and investigates how identities intersect with forms of political and economic inequality. Nepal’s various identity groups - Dalits, indigenous nationalities, Madhesis and Muslims - have mobilized to different extents. By examining these diverse movements within the same time period and within a unitary state, the book illuminates which factors are more salient for the mobilization of identity groups.

Bringing together empirical contributions on key issues in identity production in a comparative perspective, the book presents an interesting contribution to South Asian studies as well as studies of nationalism and identity more broadly.

"Lawoti and Hangen, along with all of the contributing authors to this volume, must be applauded for producing the first, in what one hopes will be a long line of portraits of the changing dynamics of what it means to be Nepali in post-insurgency Nepal." - Andrew Nelson, University of North Texas, Asian Highlands Perspectives.

Part 1: Contextualizing Nationalism and Ethnic Conflict 1. Introduction: Nationalism and Ethnic Politics in Nepal 2. Ethnopolitics and Ethnodevelopment: An Emerging Paradigm in Nepal – with a Postscript 3. Nepali Economic History through the Ethnic Lens: Changing State Alliances with Business Elites Part 2: Identities and Movements 4. Problems of Identity for Dalits in Nepal’s Nationalist Project 5. Boycotting Dasain: History, Memory and Ethnic Politics in Nepal 6. The National Muslim Forum Nepal: Experiences of Conflict, Formations of Identity 7. In Pursuit of Recognition: Regionalism, Madhesi Identity and the Madhes Andolan 8. Refusing to Choose: The Muslim Madhesis and the Coexistence of Religious and Regional Identity in Nepal’s Tarai Part 3: Trends of Nepal’s Ethnic and Nationalist Movements and Conflicts 9. Dynamics of Mobilization: Trajectories of Dalit, Indigenous Nationalities and Madhesi Movements 10. Transforming Ethnic Politics, Transforming the Nepali Polity: From peaceful nationalist mobilization to the rise of armed separatist groups

Mahendra Lawoti is Professor of Political Science at Western Michigan University, Associate Fellow at Asia Society, USA and a columnist at The Kathmandu Post. His research interests are democratization and ethnic politics in Nepal and South Asia, and he has published widely in these areas.