Nationalism and Liberal Thought in the Arab East
Ideology and Practice 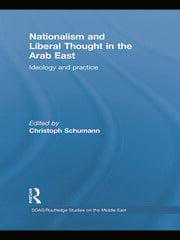 Nationalism and Liberal Thought in the Arab East: Ideology and Practice

This book explores the complex relationship between nationalism and liberal thought in the Arab East during the first half of the twentieth century. Examining this formative period through reformist Islam, Arab secularism and Arab literature, the book situates major shifts in the political ideologies and practices of Arab liberals within a historical context.

Contributions from renowned scholars in the field show how rather than fundamentally contradicting each other, these two schools of thought are closely linked. Many key demands of liberalism - most notably constitutionalism, the rule of law, individual rights, and popular participation - have been central to the nationalist agenda, while other issues have proven more controversial: inter-confessional tolerance, secularism, and the goals of state-sponsored education. Although a strong nation-state was pivotal to the nationalist imagination during most of the twentieth century, a powerful critique of unchecked state power took shape as Arab countries experienced a half-century of authoritarian government. In analyzing these issues, the chapters demonstrate how the rise and fall of liberalism across the region was not determined solely by religion or culture, but by the ideas of influential intellectuals and politicians.

Advancing our understanding of political ideology and practice in the Arab East, this volume will be of great interest to students and scholars of political science, history and the Middle East.

Introduction  Part I: Nationalism and Liberal Thought  1. The role of traditional religious scholars in Iraqi politics from the Young Turk period until 1920: the example of Yusuf al-Suwaydi Thomas Eich  2. Who is "liberal" in 1930s Iraq? Education as a contested terrain in a nascent public sphere Peter Wien  3. Liberal champions of pan-Arabism: Syria’s second Íizb al-Sha'b Fred H. Lawson  4. Nation, state, and democracy in the writings of Zaki al-Arsuzi Dalal Arsuzi-Elamir  5. Nationalism as a cause: Arab nationalism in the writings of Ghassan Kanafani Orit Bashkin  Part II: Arab intellectuals and liberal thought  6. Modernity, romanticism, and religion: contradictions in the writings of Farah Antun Alexander Flores  7. Progress and liberal thought in al-Hil'al, al-Man'ar, and al-Muqta'aaf before World War I Thomas Philipp  8. Liberal democracy versus fascist totalitarianism in Egyptian intellectual discourse: the case of Salama Musa and 'al-Majalla al-JadÐda' Israel Gershoni  9. The "failure" of radical nationalism and the "silence" of liberal thought in the Arab world Christoph Schumann

Christoph Schumann is Professor of Politics and Contemporary History of the Middle East at the University of Erlangen-Nuremberg, Germany. His research focuses on political ideologies in the Middle East and Muslims in the West, and he has previously written on the topics of liberalism in the Mediterranean and radical nationalism in Syria and Lebanon.