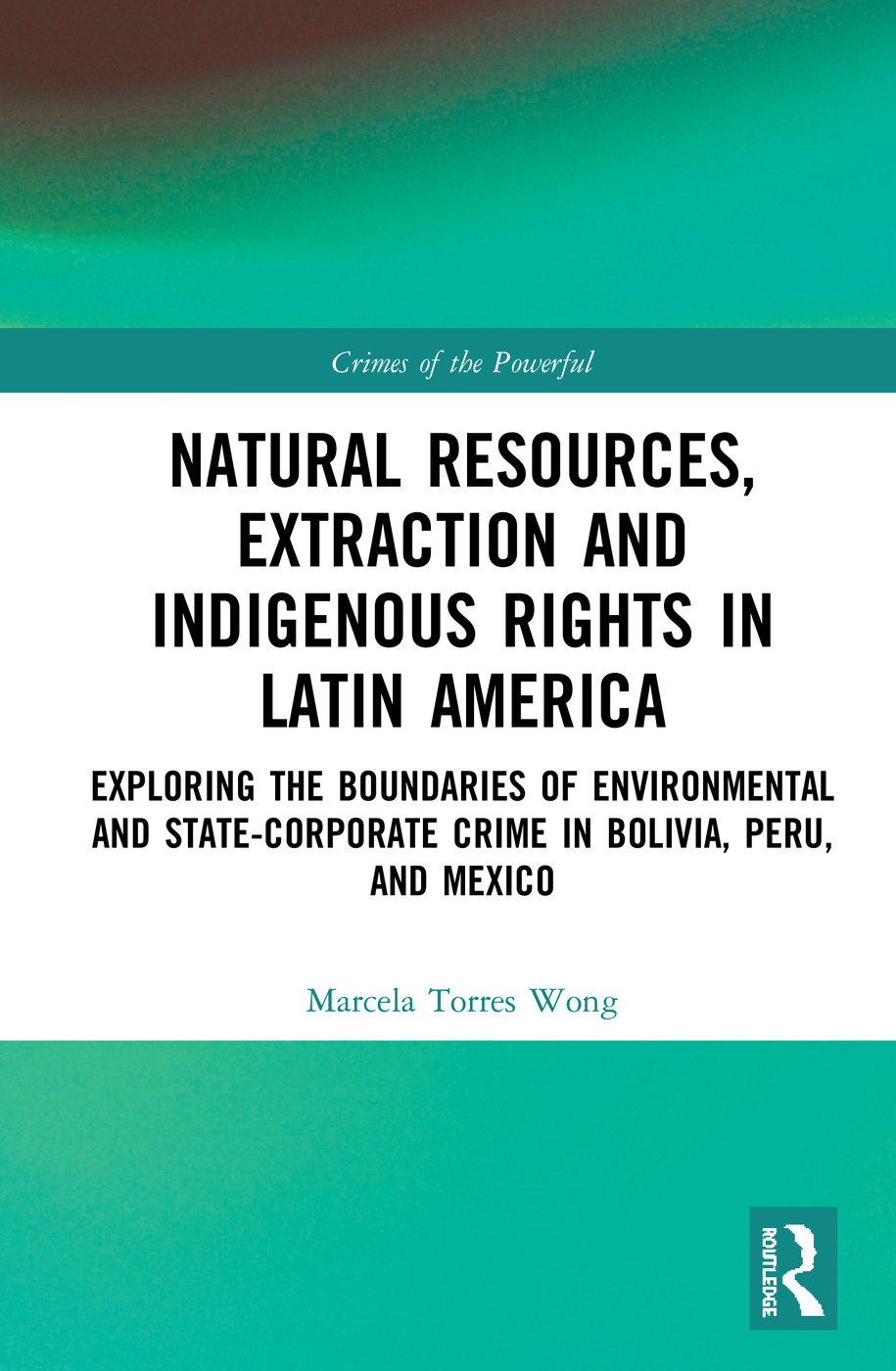 Exploring the Boundaries of Environmental and State-Corporate Crime in Bolivia, Peru, and Mexico, 1st Edition

In 1989, the International Labor Organization stated that all indigenous peoples living in the postcolonial world were entitled to the right to prior consultation, over activities that could potentially impact their territories and traditional livelihoods. However, in many cases the economic importance of industries such as mining and oil condition the way that governments implement the right to prior consultation.

This book explores extractive conflicts between indigenous populations, the government and oil and mining companies in Latin America, namely Mexico, Peru and Bolivia. Building on two years of research and drawing on the state-corporate and environmental crime literatures, this book examines the legal, extralegal, illegal as well as political strategies used by the state and extractive companies to avoid undesired results produced by the legalization of the right to prior consultation. It examines the ways in which prior consultation is utilized by powerful indigenous actors to negotiate economic resources with the state and extractive companies, while also showing the ways in which weaker indigenous groups are incapable of engaging in prior consultations in a meaningful way and are therefore left at the mercy of negative ecological impacts. It demonstrates how social mobilization—not prior consultation—is the most effective strategy in preventing extraction from moving forward within ecologically fragile indigenous territories.

"Marcela Torres Wong has written a tour de force on the extractive conflicts in Latin America and the rights of indigenous peoples, specifically in the countries of Mexico, Peru, and Bolivia. Her methodological diversity and her on the ground filed techniques serve not only to demystify our previous understandings of indigenous peoples rights and their struggles to survive in a global political economy, but she also shines light on and captures the geo-political realities of Green Criminology and sustainability in the 21st century."

"Does the implementation of the right to prior consultation granted by ILO Convention 169 protect indigenous territories from ecologically controversial extractive industries? This is the leading question put by Marcela Torres Wong in this disruptive book that demystifies and shed new light on the issue. Using case studies she empirically demonstrates that the legalization of prior consultation has not been the most adequate way to achieve the safeguard of indigenous peoples and that this legal mechanism even enables the state to further extractive projects. In light of green criminology studies Torres Wong explains the tension between pro-extractivist and anti-extractivist indigenous movements as a consequence of the industrialized exploitation of natural resources. This is a must read for scholars, politicians and civil society interested in a fair relationship between global economic interests, natural resources and human rights of indigenous people."

"Over the last two decades, green criminologists have endeauvored to expose the ways in which state actors permit or facilitate environmental harm by enabling corporate access to "natural resources". In this thoroughly researched and beautifully insightful book, Marcela Torres Wong illuminates the increasing conflict surrounding indigenous lands and extractive industry in Latin America. Her remarkably nuanced account reveals why prior consultation is not a mechanism for protecting indigenous lands from the impacts of extraction. Readers will be amazed and surprised by Wong's description of how the political and economic management of "natural resources" by governments and multinational corporations influences the implementation of indigenous rights, while reshaping indigenous peoples' goals."

"Marcela Torres-Wong offers an intriguing, well-developed and sophisticated, in-depth examination of Indigenous people’s activism against extractive industries in Bolivia, Peru, and Mexico. Using a masterful combination of in-depth ethnographic fieldwork, process tracing and quantitative data analysis, Torres-Wong sheds light on the myriad clever and knowledgeable strategies used by Indigenous activists against a broad range of oil and mining companies. This book will be of interest to activists, policy-makers and scholars of social movements and comparative politics, as it carefully lifts the veil surrounding the often unexplored scholarly territory of studies of Indigenous people as activists against extractive industries in Latin America."

1.What do indigenous people want?

3. Rights do not matter, political power does

4. There is nothing to consult here!

5. Prior consultation and the expansion of extractivism

Marcela Torres Wong is a Peruvian lawyer and anthropologist at the Pontificia Universidad Catolica del Peru. She has a PhD in Political Science from The American University in Washington, DC. Since 2017, she has worked as a full-time professor and researcher in the Latin American Faculty of Social Science (FLACSO) in Mexico City. Her research interests include indigenous movements, extractive industries and socio-environmental conflicts in Latin America. She has received grants from the Inter-American Foundation (IAF), the Tinker Foundation, and the Centre National de la Recherche Scientifique (CNRS).