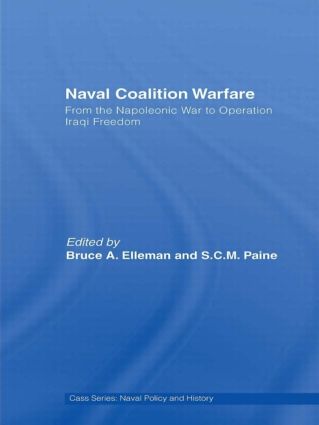 From the Napoleonic War to Operation Iraqi Freedom, 1st Edition

This is the first scholarly book examining naval coalition warfare over the past two centuries from a multi-national perspective.

Containing case studies by some of the foremost naval historians from the US, Great Britain, and Australia, it also examines the impact of international law on coalitions. Together these collected essays comprise a comprehensive examination of the most important naval coalitions of the nineteenth and twentieth centuries. Chapters are arranged chronologically, beginning with the Napoleonic Wars, and ending with the second Gulf War, and each makes use of new research and methodologies to address the creation of the coalition, its actions, and its short- and long-term repercussions.

The editors draw contemporary lessons from the book’s historical case studies. These findings are used to discuss the likelihood and character of future naval coalition; for example, the likelihood and possible outcome of an anti-PRC coalition in defence of Taiwan.

Naval Coalition Warfare will be of great interest to students of naval history, strategic studies, international history and international relations in general.

Bruce Elleman is an Associate Professor in the Maritime History Department at the US Naval War College. He is author of Modern Chinese Warfare, 1795-1989 (Routledge, 2001), and co-editor, with Chris Bell, of Naval Mutinies of the Twentieth Century: An International Perspective (Frank Cass, 2003).

Sarah C.M. Paine is an Associate Professor in the Strategy & Policy Department at the US Naval War College