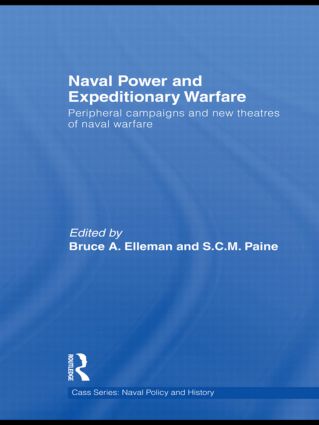 This book examines the nature and character of naval expeditionary warfare, in particular in peripheral campaigns, and the contribution of such campaigns to the achievement of strategic victory.

Naval powers, which can lack the massive ground forces to win in the main theatre, often choose a secondary theatre accessible to them by sea and difficult for their enemies to reach by land, giving the sea power and its expeditionary forces the advantage. The technical term for these theatres is ‘peripheral operations.’ The subject of peripheral campaigns in naval expeditionary warfare is central to the British, the US, and the Australian way of war in the past and in the future. All three are reluctant to engage large land forces because of the high human and economic costs. Instead, they rely as much as possible on sea and air power, and the latter is most often in the form of carrier-based aviation. In order to exert pressure on their enemies, they have often opened additional theaters in on-going, regional, and civil wars.

This book contains thirteen case studies by some of the foremost naval historians from the United States, Great Britain, and Australia whose collected case studies examine the most important peripheral operations of the last two centuries.

This book will be of much interest to students of naval warfare, military history, strategic studies and security studies.

"Unsurprisingly, the essays are of a high overall quality; most of them are of a fairly modest length, but they are thought provoking and well written. Overall, Naval Power and Expeditionary Warfare is a very strong work - and, giventhe recent NATO war against Libya, an especially timely one. It should be of much intereste to readers interested in the history of peripheral campaigns and those considering how U.S. military power should be used in future." - C. Dale Walton, Comparative Strategy

"While general students of naval history will find much here of interest, Naval Power and Expeditionary Wars holds special appeal for those professionals in strategic and security studies" - Spencer C. Tucker, International Journal of Maritime History, Vol. XXIII, No. 2, Dec 2011

Bruce A. Elleman is Research Professor in the Maritime History Department at the U.S. Naval War College.

S.C.M. Paine is a Professor in the Strategy and Policy Department at the U.S. Naval War College.