Nazism in Syria and Lebanon
The Ambivalence of the German Option, 1933–1945 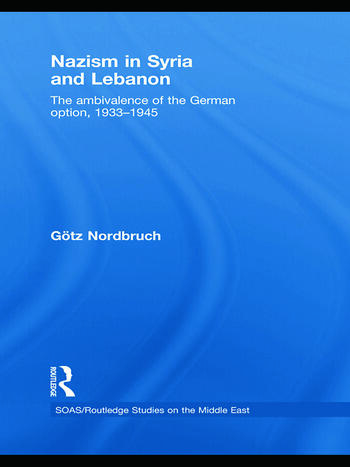 Nazism in Syria and Lebanon: The Ambivalence of the German Option, 1933–1945

The increasingly vibrant political culture emerging in Lebanon and Syria in the 1930s and early 1940s is key to the understanding of local approaches towards the Nazi German regime. For many contemporary observers in Beirut and Damascus, Nazism not only posed a risk to Europe, but threatened to take root in Arab societies as well.

In the first publication to reconstruct Lebanese and Syrian encounters with Nazism in the context of an evolving local political culture and to base its analysis on a comprehensive review of Arab, French and German sources, Götz Nordbruch examines the reactions to the rise of Nazism in the countries under French mandate, spanning from fascination and endorsement to the creation of antifascist networks.

Against a background of public discourses, local politics and the shifting regional and international settings, this book interprets public assessments of and contact with the Nazi regime as part of an intellectual quest for orientation in the years between the break-up of the Ottoman Empire and national independence.

Introduction  i. Nazism and the Mandates: Approaches to the Subject and Research Questions  ii. Parties, Public, and the Civic Order: The Historical Context of Lebanon and Syria during the Interwar Years  1. Struggles for a New Order: The Rise of the Nazi Regime and the Levantine Mandates (1933-1936) 1.1 Nazism in the Local Press: Crisis, Challenge, and the Longing for a ‘New Dawn’ 1.2 Approaching Nazism: Local Politics between Beirut, Damascus, Paris and Berlin  2. Nazism and the Levant – Nazism in the Levant: Between Treaty Negotiations and World War II (1936-1939) 2.1 Mobilizing the Youth and the Fascist Experiment 2.2 Nationalist Struggles and the German Option: Nazi Germany as Friend and Foe 2.3 Echoes of Nazism in Intellectual Discourses: Community, Revival, and the Enemies of the Nation  3. Repercussions of World War II: Facing the Axis in the Levant (1939-1941) 3.1 On the Eve of War: Echoes of German Aggressions in the Mandates 3.2 Local Politics between Britain, Free France, and the Axis: Resistance, Accommodation and Collaboration  4. Nazism in Retreat: The Fading of an Option and the Battle for Independence (1941-1945) 4.1 Collaboration in Exile, New Allies, and the Struggles for Power 4.2 The Search for a Post-Colonial Order: The Rise of Ideology-Guided Politics and the German Defeat 4.3 The International Arena: Arab Unity, the Atlantic Charter and the Struggle against Zionism  5. The Levant in May 1945: The Defeat of Nazism and Hopes for Independence  Conclusion

Götz Nordbruch is research associate at the IREMAM, Aix-en-Provence, France. His research interests include the history of Arab-European relations and the development of modern Arab political culture. He is currently working on Arab students in interwar Europe.

"This is an important addition to a spate of scholarly work that has appeared in recent years, and in which the assumption that throughout the 1930s and 1940s the Middle East was swamped by waves of admiration for or, at the very least, identification with fascism and Nazism is reexamined. (...) Nordbruch's is an excellent and systematic piece of research, based on a thorough study of the press and other, contemporary material."

"makes extensive use of newspapers from the French Mandate territories, integrating them very persuasively with detailed readings of the French colonial and German archives to produce a survey of Arab–Nazi relations in Syria and Lebanon that has both breadth and depth. The result is a nuanced and fair picture that gives preference neither to the voices supporting Nazism nor to those who rejected it. The conclusions are therefore not clear-cut but delineate a broad range of visions of the meaning that modern totalitarian rule, such as that in Nazi Germany, could have for the creation of a modern Levantine society."

"The number of books dealing with Arab relations to Nazism - or with the weakness of these relations - is limited. (...) Recently, the German scholar Goetz Nordbruch published a book that is more comprehensive and detailed than previous studies in this field. He deals, from the perspective of Arab-Nazi German relations, with thoughts, parties and the press in Syria and Lebanon, highlighting aspects of the history of these countries that have so far remained in the dark."

"provides a comprehensive and balanced picture of the political debates in the two French mandates. In addition to the plentitude of material that is made accessible, and that also renders visible the nuances [within the debates], this work proves again empirically one important point: Arab societies were from a political point of view no less diverse than those in Europe. (...) Not only can Goetz Nordbruch's book be considered as a brilliant study of the history of the Second World War and the reception of fascism in the Levante; it is also an important contribution to understand the political context in the region between the end of the war and the foundation of Israel."