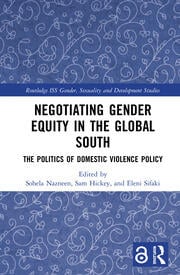 Negotiating Gender Equity in the Global South: The Politics of Domestic Violence Policy

The Open Access version of this book, available at https://doi.org/10.4324/9781351245623, has been made available under a Creative Commons Attribution-Non Commercial-No Derivatives 4.0 license.

The fact that women have achieved higher levels of political inclusion within low- and middle-income countries has generated much speculation about whether this is reaping broader benefits in tackling gender-based inequalities. This book uncovers the multiple political dynamics that influence governments to adopt and implement gender equity policies, pushing the debate beyond simply the role of women’s inclusion in influencing policy. Bringing the politics of development into discussion with feminist literature on women's empowerment, the book proposes the new concept of ‘power domains’ as a way to capture how inter-elite bargaining, coalitional politics, and social movement activism combine to shape policies that promote gender equity.

In particular, the book investigates the conditions under which countries in sub-Saharan Africa and South Asia have adopted legislation against domestic violence, which remains widespread in many developing countries. The book demonstrates that women’s presence in formal politics and policy spaces does not fully explain the pace in adopting and implementing domestic violence law. Underlying drivers of change within broader domains of power also include the role of clientelistic politics and informal processes of bargaining, coalition-building, and persuasion; the discursive framing of gender-equitable ideas; and how transnational norms influence women’s political inclusion and gender-inclusive policy outcomes. The comparative approach across Uganda, Rwanda, South Africa, Ghana, India, and Bangladesh demonstrates how advancing gender equality varies by political context and according to the interests surrounding a particular issue.

will be of interest to students and scholars of gender and development, as well as to activists within governments, political parties, nongovernmental organizations, women’s movements, and donor agencies, at national and international levels, who are looking to develop effective strategies for advancing gender equality.

'This book provides exciting new ways of thinking about how women’s rights policy change occurs in the Global South. Drawing on meso-level analysis of how six countries passed legislation to combat domestic violence, the book shows, for example, the importance of forming strategic alliances around the interests and ideas of dominant actors; the role of elite cohesion; and the politics of ideas and discursive framing of gender equity. It is certain to influence contemporary thinking about gender-related policy reform and, as such, it is a must read for international and domestic policy makers, women's rights activists, donors, scholars of gender and politics, and many others.'-- Aili Mari Tripp, Wangari Maathai Professor of Political Science & Gender and Women’s Studies, University of Wisconsin-Madison, USA

'Understanding the political processes that lead to greater gender equity in the Global South is a first step in tackling problems such as domestic violence in a transformative way. This book makes an important contribution both conceptually and empirically in this highly policy-relevant field – a must read for scholars, activists, and policy-makers committed to promote gender equality and social justice.' -- Katja Hujo, Senior Research Coordinator, Social Policy and Development Programme, UNRISD, Switzerland

'This book is a great addition to the literature on gender equality policies, focusing particularly on domestic violence in the Global South. It carefully demonstrates the strategies for confronting deeply entrenched power inequalities across institutions of the state and society. A must read for activists and researchers alike.' -- Nitya Rao, Professor of Gender and Development, University of East Anglia, UK

'This is an excellent collection of articles. Not only does it deal with a topic that has been prioritized by the international women’s movement, but