Negotiating Water Governance
Why the Politics of Scale Matter 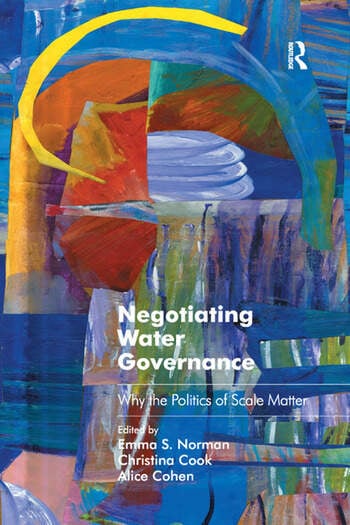 Negotiating Water Governance: Why the Politics of Scale Matter

Those who control water, hold power. Complicating matters, water is a flow resource; constantly changing states between liquid, solid, and gas, being incorporated into living and non-living things and crossing boundaries of all kinds. As a result, water governance has much to do with the question of boundaries and scale: who is in and who is out of decision-making structures? Which of the many boundaries that water crosses should be used for decision-making related to its governance? Recently, efforts to understand the relationship between water and political boundaries have come to the fore of water governance debates: how and why does water governance fragment across sectors and governmental departments? How can we govern shared waters more effectively? How do politics and power play out in water governance? This book brings together and connects the work of scholars to engage with such questions. The introduction of scalar debates into water governance discussions is a significant advancement of both governance studies and scalar theory: decision-making with respect to water is often, implicitly, a decision about scale and its related politics. When water managers or scholars explore municipal water service delivery systems, argue that integrated approaches to salmon stewardship are critical to their survival, query the damming of a river to provide power to another region and investigate access to potable water - they are deliberating the politics of scale. Accessible, engaging, and informative, the volume offers an overview and advancement of both scalar and governance studies while examining practical solutions to the challenges of water governance.

’Tackling a critical problem facing society, water governance, the authors of this volume unsettle a concept long fitted uncritically into the analytical toolbox of geographers - scale. By questioning how scale is defined, redefined, and even performed using detailed cases from four continents, this book helps readers to fundamentally re-think how scale is produced to affect the governance of water. Their challenge to reconsider scale in water governance also encourages us to re-think how other, interconnected environmental governance challenges might be addressed.’ Maureen G. Reed, University of Saskatchewan, Canada ’There has been a lot of talk about how physical matter and socio-political organization interrelate. Rare are the studies that actually show the dynamic interlacing of socio-political and hydro-physical scales. This is one of them and therefore indispensable reading for those concerned with questions of how water, social power and political space shape hydro-social landscapes.’ Erik Swyngedouw, Manchester University, UK ’Cutting through debates over the politics of scale and water governance with remarkable skill, this outstanding set of essays demonstrates the conceptual sophistication of research on the politics of water while simultaneously presenting an innovative framework for rethinking scalar processes. With outstanding contributors and a wide-ranging geographical focus, this is a genuinely exciting collection.’ Alex Loftus, King’s College London, UK ’Water touches everything, materially and politically: lives, societies, and ecosystems require it; agriculture, industry, and energy production demand it; and water flows across boundaries are leading sources of conflict and cooperation. Understanding its governance is therefore vital. In this volume, leading researchers demonstrate, empirically and theoretically, that the politics of scale lie at the heart of water governance and indeed all environmental governance.’ James Mc