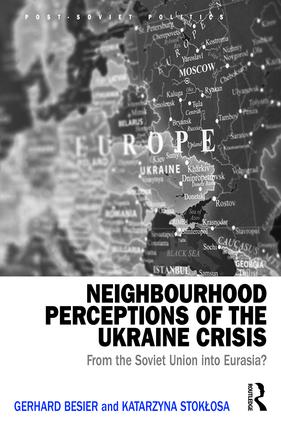 Neighbourhood Perceptions of the Ukraine Crisis

From the Soviet Union into Eurasia?, 1st Edition

Recent events in Ukraine and Russia and the subsequent incorporation of Crimea into the Russian state, with the support of some circles of inhabitants of the peninsula, have shown that the desire of people to belong to the Western part of Europe should not automatically be assumed. Discussing different perceptions of the Ukrainian-Russian war in neighbouring countries, this book offers an analysis of the conflicts and issues connected with the shifting of the border regions of Russia and Ukraine to show how ’material’ and ’psychological’ borders are never completely stable ideas. The contributors – historians, sociologists, anthropologists and political scientists from across Europe – use an interdisciplinary and comparative approach to explore the different national and transnational perceptions of a possible future role for Russia.

Part I: Russia and Ukraine: An Ambivalent Neighbourhood

4. Russian Perceptions of the Ukrainian Crisis: From Confrontation to Damage Limitation?

5. A Squeezed Country: Ukraine between Europe and Eurasia

Part II: Russian Borders in the Light of the Crisis

6. Shifting Borders: Unpredictability and Strategic Distrust at the Finnish–Russian Border

7. Russia–EU Borderlands after the Ukraine Crisis: The Case of Narva

8. Invested in Ukraine: The Struggle of Lithuania against Russia over the Future of Europe

9. Fearing the Worst: A Latvian View on Russia and the Conflict in Ukraine

10. The Return of Geopolitics: Georgia in the Shadow of Russian–Ukrainian Conflict

11. Having a Déjà Vu: The Perception of the Ukrainian Crisis in the Republic of Moldova

12. Ukraine and Russia in Crisis: A Polish View

13. The Caspian States Perception of the Conflict between Ukraine and Russia

14. Sources of Popular Support and Opposition to the Putin Regime

The New Influence of Some Old State Churches: The Russian Orthodoxy

16. Ukraine: Historical Notes on Re-Unification of the Russian Lands

Katarzyna Stoklosa is Associate Professor in the Department of Political Science and Public Management, Centre for Border Region Studies at the University of Southern Denmark, Denmark.