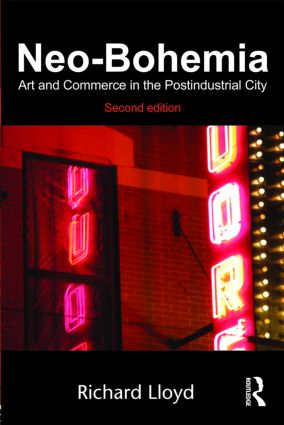 Art and Commerce in the Postindustrial City, 2nd Edition

Neo-Bohemia brings the study of bohemian culture down to the street level, while maintaining a commitment to understanding broader historical and economic urban contexts. Simultaneously readable and academic, this book anticipates key urban trends at the dawn of the twenty-first century, shedding light on both the nature of contemporary bohemias and the cities that house them. The relevance of understanding the trends it depicts has only increased, especially in light of the current urban crisis puncturing a long period of gentrification and new economy development, putting us on the precipice, perhaps, of the next new bohemia.

"Lloyd has done an excellent job of fleshing out a postmodern bohemia…This is an insightful look at the hip neighborhoods that loom so large on the cultural radar and the role they play in the new global division of labor."—Sharon Zukin, Sociology, Brooklyn College

"[Lloyd] turns over an entertainment-district economy descended from Montmartre. … He understands… that in rock and roll and design just as in gallery art there are a few geniuses, hustlers, and genius hustlers who win the lottery and a great many exploited young workers."—Robert Christgau, from barnesandnoblereview.com

"This is fascinating, original and deeply humane sociology at its finest; [Lloyd] demonstrates that in the name of freedom, young people working in allegedly relaxed service-sector jobs waste years of their lives in a whirl of drugs, alcohol and deceptively low wages."—Andrew O’Hehir, Salon

1. Introduction 2. Production and Neighborhood 3. Bohemia 4. Grit as Glamour 5. Living Like an Artist 6. The Celebrity Neighborhood 7 . The Neighborhood in Cultural Production 8 . Making the Scene 9. The Digital Bohemia 10. The Bohemia and the Spirit of Flexibility

Richard Lloyd is Assistant Professor of Sociology at Vanderbilt University