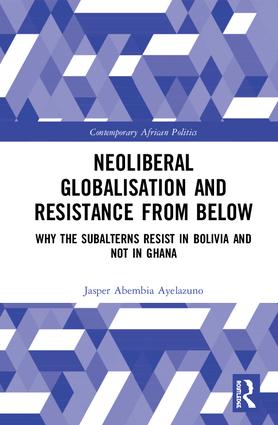 Neoliberal Globalisation and Resistance from Below

Why the Subalterns Resist in Bolivia and not in Ghana, 1st Edition

As bearers of their own emancipation, the political agency of the subaltern classes is a vexed question, a time-honoured one at that. Why do the subalterns endure injustices without revolting most of the time, but revolt sometimes against some injustices? The euphoria of ’globalisation-from-below’, this book argues, skirts responsibility of addressing this question by presuming a groundswell of resistance across the world against neoliberal globalisation. In contrast to this oeuvre, Neoliberal Globalisation and Resistance from Below engages this question squarely by using the socio-historical approach to explain why the subalterns resist neoliberal globalisation in Bolivia and not in Ghana. The author urges scholars of critical political economy to pay greater attention to why the subalterns resist, rather than how they resist, or what the ideal end of their resistance should be. Such refocusing of the research and political lens will yield a more realistic picture of what is politically possible in the social context of peripheral capitalism regarding an anti-capitalist revolution. The author further argues that this refocusing will cure many of the romantic anti-capitalist claims and banal wishful thinking of a socialist revolution in peripheral capitalist regions such as Latin American, The Middle East and North Africa (MENA), and Sub-Saharan Africa.

Neoliberal Globalisation and Resistance from Below

will be of interest to students and scholars of African politics, neoliberalism, globalisation, political economy and subaltern politics.

Foreword by David B. Moore

Introduction: Uneven Resistance in the Context of Uneven Capitalist Development

The Social-Historical Approach to Agency: ‘Pessimism of the Intellect and Optimism of the Will’

Chapter Three: Why the Subalterns Resist: the Cosmo-materialism of the Global Anti-Neoliberalism Resistance Movement

The Rebellious Subalterns in Bolivia: Socio-Historical Dynamics of the Bolivian Model of Anti-neoliberalism

: Subaltern Agency and Resistance in the Social-Historical Context of The Gold Coast

Neoliberalism and Resistance in Ghana

Jasper Abembia Ayelazuno is a Senior Lecturer at the Department of Communication, Innovation and Technology, University for Development Studies, Ghana.

Once seen only as a continent of poverty, violence and corruption, the Africa of today is a vibrant place where social forces demand representative governance, in the process generating fresh forms of complexities in the political, social and economic life of ordinary Africans. Whether what we are witnessing is a third liberation of the continent: the first from colonialism, the second from autocratic indigenous rule and now something far more different, is a work in progress.

This series seeks original approaches to furthering our understanding of the ensuing changes on the continent. The series includes work that progresses comparative analysis of African politics. It looks at the full range and variety of African politics in the twenty-first century covering the changing nature of African society, gender issues, economic prosperity and poverty to the development of relations between African states, external organisations and between leaders and the people they would govern. The series aims to publish work by senior scholars as well as the best new researchers and features original research monographs, thematically strong edited collections and specialised texts.