Neoliberalism and Conflict In Asia After 9/11 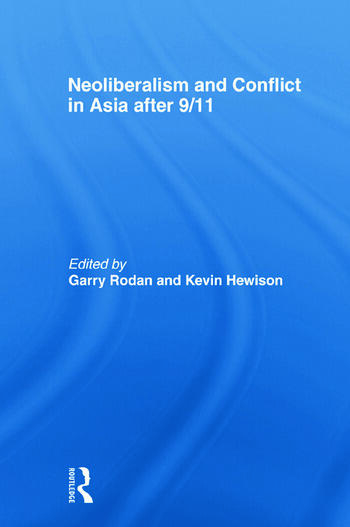 Neoliberalism and Conflict In Asia After 9/11

Key events in Asia’s recent history have included the end of the Cold War, the Asian Economic Crisis and the ‘war on terror’. This is a critical assessment of these events, and of the interplay of security and economics in shaping political regimes and modifying market systems.

Based on the notion that market systems are inherently political and conflict-ridden, this collection clarifies and explains the conflicts shaping the path of neoliberal globalization. Collectively it represents a disciplined and systematic address of four overarching questions:

* What are the significant conflicts emanating from neoliberal globalization, and what are their implications?
* What are the implications of new security concerns for these conflicts, and what are their impacts?
* How are conflicts associated with globalization and security affecting social and economic policy directions?
* Can these directions be reconciled with the reproduction of existing political regimes, or do they threaten their basis?

In addressing these questions, the essays depict neoliberal globalization – in the new security context – as being able to accommodate a range of political regimes. This fascinating collection is a must-read for those with a professional interest in the region post-9/11.

This book was previously published as a special issue of the Journal Critical Asian Studies.

1. Globalization, Conflict and Political Regimes in East and Southeast Asia Garry Rodan and Kevin Hewison  2. Neoliberalistm and the Future World: Markets and the End of Politics Richard Robison  3. After Neoliberal Globalization: The "Securitization of U.S. Foreign Economic Policy in East Asia Richard Higgott  4. U.S. Hegemony and Southeast Asia: The Impact of, and Limits to, U.S. Power and Influence Mark Beeson  5.  APEC, Globalization, and 9/11: The Debate on What Constitutes Asian Regionalism Ian Taylor  6. International Capital, Singapore’s State Companies, and Security Garry Rodan  6. The Antipolitics of Good Governance: From Global Social Policy to a Global Populism? Kanishka Jayasuriya and Kevin Hewison  7. Political Regimes and Development Assistance: The Political Economy of Aid Selectivity Wil Hout  8. The Arroyo Government and ‘Civil Society’ Participation in the Philippines: Neoliberalism, Political Alliances, and Succession [note: this chapter was not included in the Special Issue, but is to be included in the book] Ben Reid  9. Indonesian Local Party Politics: A Site of Resistance to Neoliberal Reform  Vedi R. Hadiz  10. Full Circle? Rural Land Reforms in Globalizing China Sally Sargeson  11. Globalization, International Coalitions, and Domestic Reform Shaun Breslin

Garry Rodan is the Director of the Asia Research Centre and Professor of Politics and International Studies at Murdoch University, Perth, Australia.