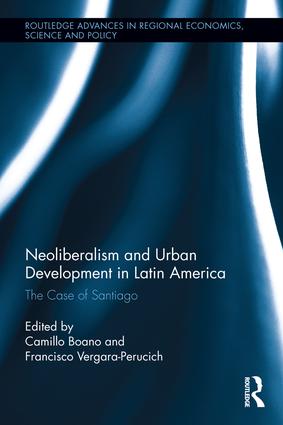 The Case of Santiago, 1st Edition

In the 1970s and following on from the deposition of Salvador Allende, the Chilean dictatorship of Augusto Pinochet installed a radical political and economic system by force which lent heavy privilege to free market capitalism, reduced the power of the state to its minimum and actively suppressed civil society. Chicago economist Milton Friedman was heavily involved in developing this model, and it would be hard to think of a clearer case where ideology has shaped a country over such a long period. That ideology is still very much with us today and has come to be defined as neoliberalism.

This book charts the process as it developed in the Chilean capital Santiago and involves a series of case studies and reflections on the city as a neoliberal construct. The variegated, technocratic and post-authoritarian aspects of the neoliberal turn in Chile serve as a cultural and political milieu. Through the work of urban scholars, architects, activists and artists, a cacophony of voices assemble to illustrate the existing neoliberal urbanism of Santiago and its irreducible tension between polis and civitas in the specific context of omnipresent neoliberalism. Chapters explore multiple aspects of the neoliberal delirium of Santiago: observing the antagonists of this scheme; reviewing the insurgent emergence of alternative and contested practices; and suggesting ways forward in a potential post-neoliberal city.

Refusing an essentialist call, Neoliberalism and Urban Development in Latin America offers an alternative understanding of the urban conditions of Santiago. It will be essential reading to students of urban development, neoliberalism and urban theory, and well as architects, urban planners, geographers, anthropologists, economists, philosophers and sociologists.

Forewords Neoliberalims and Santiago between Fabula and Delirium

Chapter 1 Foucault and Agamben in Santiago: governmentality, dispositive and space

Chapter 3 Space production and social exclusion in Greater Santiago under

Chapter 5 Urban Universalism: the housing debt in the context of targeted policies

Chapter 6 The mobility regime in Santiago and possibilities of change

Chapter 8 Under the politics of deactivation: Culture’s social function in neoliberal Santiago

Chapter 10 Artists self-organization on the context of unregulated transformations in territories, and communities

Chapter 11 Building the Democratic city: a challenge for social movements

Camillo Boano, PhD, is Senior Lecturer at The Bartlett Development Planning Unit, UCL, and Co-director of the MSc in Building and Urban Design in Development and the UCL Urban Laboratory, UK.

is an Architect and Urbanist by Universidad Central de Chile and PhD Candidate by The Bartlett Development Planning Unit. Currently, he is a lecturer at Economics Department of Universidad Catolica del Norte, Chile.