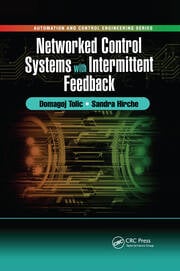 Networked Control Systems (NCSs) are spatially distributed systems for which the communication between sensors, actuators and controllers is realized by a shared (wired or wireless) communication network. NCSs offer several advantages, such as reduced installation and maintenance costs, as well as greater flexibility, over conventional control systems in which parts of control loops exchange information via dedicated point-to-point connections. The principal goal of this book is to present a coherent and versatile framework applicable to various settings investigated by the authors over the last several years. This framework is applicable to nonlinear time-varying dynamic plants and controllers with delayed dynamics; a large class of static, dynamic, probabilistic and priority-oriented scheduling protocols; delayed, noisy, lossy and intermittent information exchange; decentralized control problems of heterogeneous agents with time-varying directed (not necessarily balanced) communication topologies; state- and output-feedback; off-line and on-line intermittent feedback; optimal intermittent feedback through Approximate Dynamic Programming (ADP) and Reinforcement Learning (RL); and control systems with exogenous disturbances and modeling uncertainties.

Dr. Domagoj Tolić graduated from the Faculty of Electrical Engineering and Computing (FER), University of Zagreb, with a Master degree (Dipl.-Ing.) in Electrical Engineering (2007), majoring in Control Systems. In addition, he graduated from the Mathematics Department, University of Zagreb, with a Bachelor Degree in Mathematics (2008). Subsequently, he enrolled in the Ph.D. program, the Control Systems major, at the Department of Electrical and Computer Engineering, University of New Mexico (UNM), Albuquerque, NM, as a member of the MARHES (Multi-Agent, Robotics, Hybrid, and embedded Systems Laboratory) research group under supervision of Prof. Rafael Fierro. Upon completing the Ph.D. program (2012), he was a postdoctoral researcher in the Research Centre for Advanced Cooperative Systems (ACROSS) at FER until September 2014. During his time in ACROSS, Dr. Tolić was a visiting researcher at the Institute for Information-oriented Control, Technische Universität München from October 2013 until June 2014. Currently, he is a postdoctoral researcher at University of Dubrovnik. His research focuses on stability and estimation under intermittent information for nonlinear and multi-agent control systems. The developed theory is applied to problems in the area of multi-agent robotics.

Professor Sandra Hirche holds the TUM Liesel Beckmann Distinguished Professorship and heads the Chair of Information-oriented Control in the Department of Electrical and Computer Engineering at Technische Universität München, Germany (since 2013). She received the engineering degree in Aeronautical and Aerospace Engineering in 2002 from the Technical University Berlin, Germany, and the Doctor of Engineering degree in Electrical and Computer Engineering in 2005 from the Technische Universität München, Munich, Germany. From 2005-2007, she was a Post-Doctoral fellow of the Japanese Society for the Promotion of Science at the Fujita Laboratory at Tokyo Institute of Technology, Japan. Prior to her present appointment she has been an Associate Professor at Technische Universität München. Her main research interests include cooperative, distributed, and networked control with applications in human-robot interaction, multi-robot systems, and general robotics. She has published more than 150 papers in international journals, books, and refereed conferences. Dr. Hirche has received multiple awards such as the Rohde & Schwarz Award for her PhD thesis in 2005, the JSPS Postdoctoral Fellowship Award in 2005, the IFAC World Congress Best Poster Award in 2005, Best Paper Awards of IEEE Worldhaptics, and IFAC Conference of Maneuvering and Control of Marine Craft in 2009. Additionally, she was a finalist in the 2011 Ro-Man, the 2012 IROS Best Paper Awards, and the 2014 ECC Best Student Paper Awards. In 2013, she was awarded an ERC Starting Grant on the "Control based on Human Models."