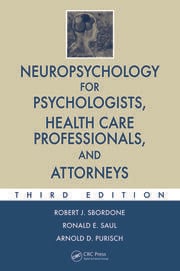 Extensively revised and expanded, this third edition of Neuropsychology for Psychologists, Health Care Professionals, and Attorneys provides a clear, concise, and comprehensive discussion of neuropsychology, outlining its purpose, use, and historical development. It covers the anatomy of the brain, a wide variety of neurobehavioral disorders, comprehensive neuropsychological examinations, ecological validity, and the strengths and limitations of many widely used neuropsychological and diagnostic tests. Maintaining a high degree of detail and sophistication, this book enables an in-depth comprehension of the topic even by those with no prior knowledge in this area.

The Education and Training of the Neuropsychologist

Clinical Neuropsychology: Comparison with Other Specialties

Reliability and Validity of Neuropsychological Tests

The Limitations of Neuropsychological Tests