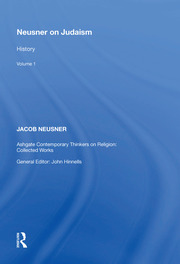 Jacob Neusner has published more than 1000 books and articles, scholarly and academic, popular and journalistic, and is one of the most published humanities scholars in the world. Over a period of fifty years he has made significant, insightful and challenging contributions to the study of Rabbinic Judaism, particularly in the disciplines covered in the three volumes which make up Neusner on Judaism: the study of history (volume 1), literature (volume 2), and religion and theology (volume 3). These unique volumes of selective writings by Jacob Neusner, with new introductions by the author, offer scholars an invaluable resource in the field of Judaic Studies.

Contents: Preface; Introduction; Introducing the scholar: From history to religion. History in formative Judaism: Organizing the past; The conception of history in formative Judaism; History and purity in first century Judaism. Problems of historical method: New problems, new solutions: current events in Rabbinic studies; Jews and Judaism under Iranian rule: bibliographical reflections; The Rabbinic traditions about the Pharisees in modern historiography; The history of earlier Rabbinic Judaism: some new approaches; Evaluating the attributions of sayings to named sages in the Rabbinic literature; The documentary history of Judaism and the problem of dating sayings; Beyond historicism, after structuralism: story as history in Ancient Judaism; Max Weber revisited: religion and society in ancient Judaism with special reference to the late first and second centuries; When intellectual paradigms shift: does the end of the old mark the beginning of the new?; The Jerusalem School and western, academic scholarship on the history of Judaism: the uneven conflict of competing contemporary paradigms of learning and the recent results. Historical studies: Jewry in the Land of Israel: Pre-70 C.E. Pharisaism: the record of the Rabbis; Two pictures of the Pharisees: philosophical circle or eating club; Judaism in a time of crisis: four responses to the destruction of the Second Temple; 'Pharisaic-Rabbinic' Judaism: a clarification; From enemy to sibling: Rome and Israel in the first century of western civilization. Historical studies: Jewry in Iranian Babylonia: Politics and theology in Talmudic Babylonia; Babylonian Jewry and Shapur II's persecution of Christianity from 339 to 379 A.D.; Archaeology and Babylonian Jewry; How much Iranian in Jewish Babylonia?. Index.