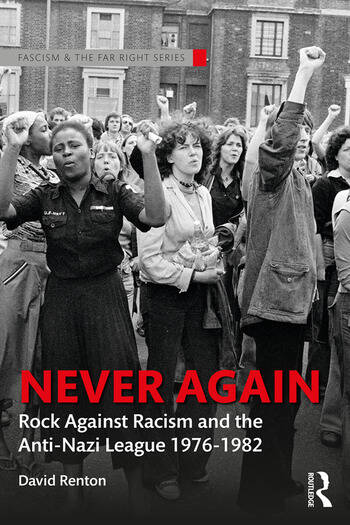 Never Again: Rock Against Racism and the Anti-Nazi League 1976-1982

By 1976, the National Front had become the fourth largest party in Britain. In a context of national decline, racism and fears that the country was collapsing into social unrest, the Front won 19 per cent of the vote in elections in Leicester and 100,000 votes in London.

In response, an anti-fascist campaign was born, which combined mass action to deprive the Front of public platforms with a mass cultural movement. Rock Against Racism brought punk and reggae bands together as a weapon against the right.

At Lewisham in August 1977, fighting between the far right and its opponents saw two hundred people arrested and fifty policemen injured. The press urged the state to ban two rival sets of dangerous extremists. But as the papers took sides, so did many others who determined to oppose the Front.

Through the Anti-Nazi League hundreds of thousands of people painted out racist graffiti, distributed leaflets and persuaded those around them to vote against the right. This combined movement was one of the biggest mass campaigns that Britain has ever seen.

This book tells the story of the National Front and the campaign which stopped it.

2. A history of coups and expulsions

3. The other young believers

6. Even God has joined the Anti-Nazi League

7. We all got high, we touched the sky

9. Keeping on keeping on

"I was gripped and loved the way it took me through different elements of popular culture, personal reflection and policy. It is the best account of the relationship between punk and the Anti-Nazi League/Rock Against Racism." Lucy Robinson, Professor in Collaborative History, University of Sussex

"A must-read for anyone who wants to understand the post-war history of racist and fascist movements and the strategies of resistance to them." Hsiao-Hung Pai, author of Angry White People

"David Renton's book helps us understand a pivotal moment in the defeat of fascism; it addresses the militant tradition of anti-fascism with real consideration." Louise Purbrick, contributor to Physical Resistance: A Hundred Years of Anti-Fascism

"For an insight into how to build a mass, popular and victorious movement around anti-fascism and racism there is no better book than David Renton’s latest, Never Again, a historiography of Rock against Racism and the Anti-Nazi League, 1976-1982." Mark Perryman, Philosophy Football

"Renton’s brisk yet rigorous book excels on the political context. He elucidates the toxic internal politics of the NF...and he doesn’t skimp on the numerous disagreements that churned beneath the surface image of multi-racial solidarity in the anti-fascist camp....Yet there are broader lessons here for anyone seeking to build an effective mass movement without being derailed by purity politics or egos....Never Again explains exactly how something was done." Dorian Lynskey, The Spectator

"David Renton’s Never Again is a forensic retelling of the story of the two organisations that organised the Hackney event and the anti-fascist march through London that accompanied it, and the political ferment that gave rise to them....At least a quarter of Renton’s text is devoted to a history of the National Front and its leadership....But the book comes to life when it zeroes in on their opponents, and...the stories he tells of Rock Against Racism gigs are vivid and stirring." John Harris, New Statesman.

"David Renton who has written indefatigably on this subject...returns with another exhaustive journalistic account of this most toxic period in recent British political history....The momentous public confrontations that took place in Lewisham in 1977 and Southall in 1979...are documented here with all the meticulous scrutiny of the military historian." Stuart Walton, The London Magazine.

"The publication of Never Again comes at a time when the extreme right wing that RAR and the ANL were set up to oppose are on the march again.In this sense, it is an important means of taking stock." Neil Cooper, The Herald.

"Never Again is an arresting and atmospheric account. To say the book is timely is unnecessary, given the rise of a very different Tommy Robinson to the Tom Robinson of 1970s. Renton’s book is clear that the cultural and political response now will differ from the response then – but what he is equally clear about is the growing need for a response." Colin Revolting, Red Flag.