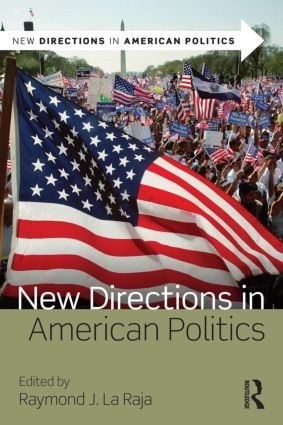 New Directions in American Politics introduces students not just to how the American political system works but also to how political science works. La Raja brings together top scholars to write original essays across the standard curriculum of American government and politics, capturing emerging research in the discipline in a way that is accessible for undergraduates. Each chapter combines substantive knowledge with the kind of skill-building and analytical inquiry that is being touted in higher education everywhere. Contributors to New Directions highlight why the questions they seek to answer are critical for understanding American politics, and situate them in the broader context of controversies in research.

The teaching of American politics follows a well-worn path. Textbooks for introductory courses hew to a traditional set of chapters that describe the Founding, American institutions, the ways citizens participate in politics, and sometimes public policy. The material rarely engages students in the kind of questions that animate scholarship on politics. One hurdle for instructors is finding material that reflects quality scholarship—and thus teaches students about why, not just what—and yet is accessible for undergraduates. Articles in scholarly journals are typically unsuited for undergraduate courses, particularly introductory courses. What is needed is a book that conveys exciting trends in scholarship across vital topics in American politics and illustrates analytical thinking. New Directions in American Politics is that book and will be an ideal companion to standard textbooks that focus mostly on nuts and bolts of politics.

There is simply no book like this available to the growing number of faculty who want their introductory American politics course to be a reflection of the political science discipline and not just the nuts and bolt facts of the American political system.

"This is the book that brings intellectual stimulation to an introductory American politics course. Faculty will be excited to introduce students to this book because it highlights current research puzzles and controversies in the field and will help develop the analytical skills that students need."

"The chapters in this impressive volume are provocative, sophisticated, and grounded in some of the best scholarship in political science. Students and scholars hoping to gain a deeper understanding of contemporary politics and many of the core challenges facing the nation will benefit from New Directions in American Politics."

"Raymond La Raja has produced a vital book featuring an impressive, accessible exploration of cutting-edge theoretical and empirical questions in political science. The all-star panel of authors write engagingly, creatively introducing students to the process of scientific discovery while simultaneously teaching students how the contemporary American political system works. Readers will also come away from this book with an analytical framework through which they can ask important questions about how the system is and how they think it should be."

is an engaging and stimulating read full of scholarly puzzles, research practices, and normative concerns. This book is a much needed contribution to our understanding of key questions raised in traditional American Politics texts. It is not the typical supplemental Reader that contains classic literature from long ago, or contemporary newspaper accounts by political journalists. Rather, New Directions asks readers to consider the logic and evidence gleaned from scholarly examination. Each chapter addresses a major issue or controversy in the academic literature, presents relevant literature reviews and evidence, and then provides solutions derived from detailed research and analyses. The chapters are a pleasure to read, engaging, accessible to a wide audience, and simply well done. I anticipate much success for this volume and encourage students and interested citizens to consider the deeper and more precise vision of our American Political System that New Directions represents."

Raymond J. La Raja is associate professor in the department of political science at University of Massachusetts, Amherst. He is the author of Small Change: Money, Political Parties and Campaign Finance Reform, as well as numerous articles on campaign finance and political parties. La Raja is founder and co-editor of The Forum: A Journal of Applied Research in Contemporary Politics.

The Routledge series New Directions in American Politics is composed of contributed volumes covering key areas of study in the field of American politics and government. Each title provides a state-of-the-art overview of current trends in its respective subfield, with an eye toward cutting edge research accessible to undergraduate students. While the volumes reflect all the main topics of relevant study, rather than cover the dry "nuts and bolts" of the subject they instead engage readers through intriguing puzzles and relevant questions that tie into your syllabus. The most recent scholarship, real-world controversies, and theoretical debates come alive in these volumes, getting students excited about the same issues that animate scholars.