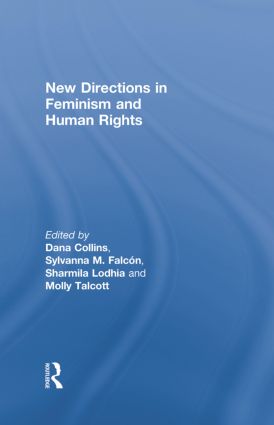 On the sixtieth anniversary of the Universal Declaration of Human Rights, feminists are at a critical juncture to re-envision and re-engage in a politics of human rights. Interdisciplinary feminist conversations among scholar-activists can both challenge and enrich new directions in feminism and human rights. The scholarly and activist writings that comprise this collection advance both research and critical conversations about feminism and human rights by revealing the transformative potential of a feminist human rights praxis that embraces both critique and collective justice. The editors' method has been to move beyond a wholesale dismissal of human rights so that the book may begin new dialogues that envision transnational, gender and antiracist social justice approaches.

This book features work that engages academic critiques of human rights frameworks yet goes further by exploring the potential of human rights activism ‘from below’. These groundbreaking chapters and conversations provide evidence of the persistent challenges and the attendant possibilities inherent in feminist human rights activism and theorizing – they offer this book, underscoring the creative displays of grassroots resistance by women globally and affirming transnational feminist solidarity.

This book was published as a special issue of the International Feminist Journal of Politics.

Foreword Mallika Dutt 1. New Directions in Feminism and Human Rights: An Introduction Dana Collins, Sylvanna Falcón, Sharmila Lodhia and Molly Talcott Research 2. Finding Each Other’s Hearts: Intercultural Relations and the Drive to Prosecute Sexual Violence during the Internal Armed Conflict in Perú Pascha Bueno-Hansen’s 3. Between the Human, the Citizen and the Tribal: Reading Feminist Politics in India’s Northeast Papori Bora 4. Claiming Health and Culture as Human Rights: Yakama Feminism in Daily Practice Michelle M. Jacob 5. Carceral Protectionism and Multi-Professional Anti-Trafficking Human Rights Work in the Netherlands Jennifer Lynne Musto 6. Sex Trafficking, Women’s Rights and the Politics of Representation Julietta Hua and Holly Nigorizawa 7. The Cultural Politics of Lesbian Asylum: Angelina Maccarone’s Unveiled (2005) and the Case of the Lesbian Asylum-Seeker Rachel Lewis 8. Discourses of Equality, Rights and Islam in the One Million Signatures Campaign in Iran Catherine Sameh 9. From Developmentalism to the HIV/AIDS Crisis: The Amplification of Women’s Rights in Lesotho Yvonne A. Braun and Michael C. Dreiling From Imagination to Praxis: Feminist Conversations about Human Rights 10. Grassroots Voices, Global Issues: An Interview with Democracy Now!'s Amy Goodman Amy Goodman (Host and Executive Producer of Democracy Now!), interviewed by Sylvanna Falcón 11. Filipinas, Gender and Human Rights Violence: A Report from the Field Peter Chua 12. "Revolution Through Trial and Error": Excerpts from a Speech by Scholar-Activist Andrea Smith Andrea Smith (Co-Founder of Incite! Women of Color Against Violence and the Boarding School Healing Project) 13. Critical Representation within "Cultures of Domination": An Interview with Peter Bratt Peter Bratt (Director, screenwriter and producer of La MISSION [2010] and Follow Me Home [1996]), interviewed by Dana Collins, Sylvanna Falcón and Molly Talcott 14. "We Have an Obligation to Speak about Human Rights": An Interview with Informativo Pacifica’s Norma Martínez Norma Martínez (Community Media Journalist, Co-Producer and Host of Informativo Pacifica), interviewed by Dana Collins and Molly Talcott 15. "Human Rights Should Encompass Everything": An Interview with Uprising's Sonali Kolhatkar Sonali Kolhatkar (Host and Executive Producer of Uprising; Co-Director of the Afghan Women’s Mission), Interviewed by Sylvanna Falcón and Molly Talcott

Dana Collins is an assistant professor of sociology at California State University, Fullerton. Her research in the Philippines follows urban renewal, sexual labour and the emergence of gay urban spaces, which is published in two special issues of Gender & Society (2005 and 2009) and one of Tourist Studies (2007). Her current research explores militarization, sexual violence and representation in the Congo.

Sharmila Lodhia is an assistant professor of Women’s and Gender Studies at Santa Clara University. Her research examines legal responses to violence against Indian women through a transnational lens. Her articles have been published in Meridians: feminism, race, transnationalism, Women’s Studies Quarterly and Columbia Journal of Gender and Law. She previously worked as a civil rights attorney for women.

Molly Talcott is an assistant professor in Sociology and Latin American Studies at California State University, Los Angeles and an interdisciplinary teacher and scholar-activist who researches race, gender, labor and human rights in the Americas. She serves on the editorial board of Gender & Society and on the editorial collective of Societies Without Borders: Human Rights and the Social Sciences.