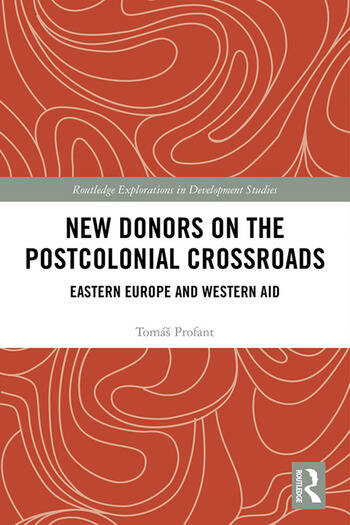 After the collapse of the Soviet Union, Eastern European countries were said to be playing catch up with the West, and in the field of development cooperation, they were classified as 'new donors.' This book aims to problematize this distinction between old and new development donors, applying an East–West dimension to global Orientalism discourse.

The book uses a novel double postcolonial perspective, examining North–South relations and East–West relations simultaneously, and problematizing these distinctions. In particular, the book deploys an empirical analysis of a 'new' Eastern European donor (Slovakia), compared with an 'old' donor (Austria), in order to explore questions around hierarchization, depoliticization and the legitimization of development.

This book's innovative approach to the East–West dimension of global Orientalism will be of interest to researchers in postcolonial studies, Eastern European studies, and critical development studies.

Tomáš Profant is a senior researcher at the Institute of International Relations in Prague, Czechia, and a lecturer at Comenius University in Bratislava, Slovakia.

"This book brings a fresh perspective to the study of the new(er) Central and Eastern European (CEE) aid donor countries. The book adopts a post-development framework… and is undoubtedly the ﬁrst major attempt to systematically use postcolonial theory to make sense of the current development discourses relating to the East–West divide among Northern donors. Scholars embracing the postcolonial view of development studies will ﬁnd much to like in the way this book problematises the East–West dichotomy and attempts to break it down. The book’s contribution to this literature, by drawing attention to the need to look at (and question perceptions of) differences within the Global North and how these affect the construction of the Global South, is highly signiﬁcant."

"In this important book, Tomáš Profant challenges ideological divisions which have been shaping the post-Cold War development industry. In a compelling manner, this rigorous study addresses socio-political and cultural hierarchization of ‘old’ and ‘new’ European donors, demonstrating that the separation is not simply a function of major differences between Eastern and Western aid providers, but instead a reflection of deep, often discriminatory and orientalising cuts that shape European fabric. A must read not only for those interested specifically in foreign aid politics, but everyone interested in European issues." -- Elżbieta Drążkiewicz, Maynooth University, Ireland

"The author presents a comprehensive analysis in which theoretical and empirical parts are linked in an exemplary manner. It displays lucid, nuanced and sharp observations concerning discursive relations of power in seemingly harmless everyday statements."