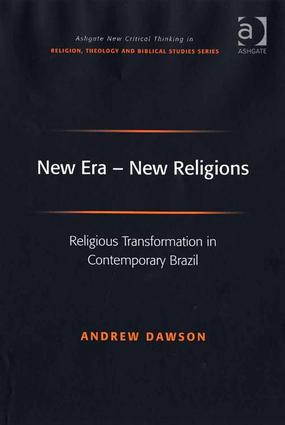 New Era - New Religions examines new forms of religion in Brazil. The largest and most vibrant country in Latin America, Brazil is home to some of the world's fastest growing religious movements and has enthusiastically greeted home-grown new religions and imported spiritual movements and new age organizations. In Brazil and beyond, these novel religious phenomena are reshaping contemporary understandings of religion and what it means to be religious. To better understand the changing face of twenty-first-century religion, New Era - New Religions situates the rise of new era religiosity within the broader context of late-modern society and its ongoing transformation.

Having studied at universities in Manchester, Chicago, Liverpool and Oxford, Andrew Dawson holds degrees in the study of religion and the social sciences. Research interests centre upon religion and late-modern society, with particular focus upon South America and Brazil. He has published a book, articles, chapters, and encyclopaedia pieces on religion and society in Brazil and South America. For example, ’The Gnostic Church of Brazil: Contemporary Neo-esotericism in Late-Modern Perspective’, Interdisciplinary Journal of Research on Religion, vol.1 (2005); ’South American Indigenous Religions’ in C.H. Partridge (ed.) Lion Handbook of Religions (London: Lion, 2004); ’Mystical Experience as Universal Connectedness: Leonardo Boff’s trans-cultural phenomenology’, Journal of Contemporary Religion, vol.19, no.2 (2004); The Emergence and Impact of the Base Ecclesial Community and Liberative Theological Discourse in Brazil (Bethesda: University Press of America, 1998).

The Routledge New Critical Thinking in Religion, Theology and Biblical Studies series brings high quality research monograph publishing back into focus for authors, international libraries, and student, academic and research readers. This open-ended monograph series presents cutting-edge research from both established and new authors in the field. With specialist focus yet clear contextual presentation of contemporary research, books in the series take research into important new directions and open the field to new critical debate within the discipline, in areas of related study, and in key areas for contemporary society.