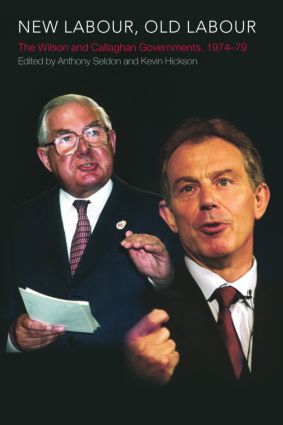 We are constantly told that New Labour forms an historic departure from the traditions of the Labour Party. This book, written by a distinguished selection of academics and commentators, provides the most detailed comparison yet of old and new Labour in power. It is also the first to offer a comprehensive analysis of the last Labour Government before the rise of Thatcher and the re-emergence of the Labour Party under Tony Blair's leadership. It reveals much about the history of the Labour Party as well as providing a much-needed context from which to judge the current government.

'I absolutely recommend this book to anyone judging today both the Blair government and the Labour government of 1974-78.' - Steve Richards, GMTV, Sunday Breakfast Show

Anthony Seldon is one of Britain's foremost political experts. He is Tony Blair's authorised biographer and his previous books include; The Powers Behind the Prime Minister (2001), The Blair Effect (2001), The Foreign Office (2000), Britain Under Thatcher (1999), Major (1998) and The Heath Government (1996).

Kevin Hickson is Lecturer in British Politics at the University of Liverpool. He is co-editor of the forthcoming The Struggle for Labour's Soul: Understanding the Political Thought of the Labour Party (2004).