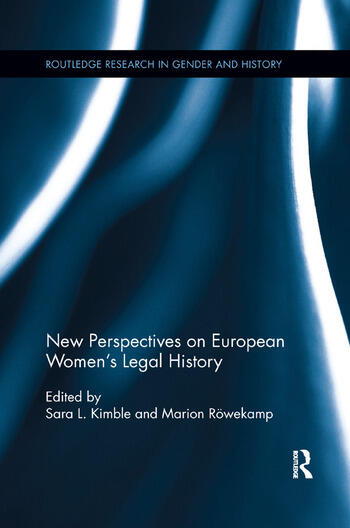 This book integrates women’s history and legal studies within the broader context of modern European history in the late nineteenth and twentieth centuries. Sixteen contributions from fourteen countries explore the ways in which the law contributes to the social construction of gender. They analyze questions of family law and international law and highlight the politics of gender in the legal professions in a variety of historical, social and national settings, including Eastern, Southern, Western, Northern and Central Europe. Focusing on different legal cultures, they show us the similarities and differences in the ways the law has shaped the contours of women and men’s lives in powerful ways. They also show how women have used legal knowledge to struggle for their equal rights on the national and transnational level. The chapters address the interconnectedness of the history of feminism, legislative reforms, and women’s citizenship, and build a foundation for a comparative vision of women’s legal history in modern Europe.

Part I: Gender and Family Law

1. Adaptation, Emulation, or Tradition?: Greek Family Law and the Courts in the First Decades of the Modern Greek State

3. Democracy at Home: Debating Family and Marriage Law in the First Czechoslovak Republic, 1918–1938

4. Equality at Stake: Legal and National Discourses on Family Law in Czechoslovakia, 1918-1931

6. Women and the Courts in Twentieth-Century Belgium: An Historical Perspective

7. The First Lawyers and Attorneys: The Struggle for Professional Recognition of Women’s Rights in Yugoslavia, 1918-1953

8. Bulgarian Women in Legal Education and the Legal Profession During the First Half of the Twentieth Century

9. "The Napoleonic Civil Code is to Blame for My Decision to Study Law": Female Polish Law Students and Lawyers in the Second Polish Republic (1918-1939)

12. Attempting to Advocate: Women Entering the Legal Profession in Finland, 1885-1915

13. Tracking Feminist Interventions in International Law Issues at the League of Nations: From the Nationality of Married Women to Legal Equality in the Family, 1919-1970

14. "Who Belongs" or the Question of Women’s Citizenship in Switzerland Since 1798

15. Legal Position of Women in Portugal: The Case of the Standing Committee on Legislation of the National Council of Portuguese Women (CNMP), 1914–1947

16. Night Work for White Women and Bonded Labour for "Native" Women?: Contentious Traditions and the Globalization of Gender-Specific Labour Protection and Legal Equality Politics, 1926 to 1939

Sara L. Kimble is a historian at DePaul University in Chicago, Illinois.

Marion Röwekamp is Feodor Lynen Fellow of the Alexander von Humboldt Foundation at UNAM and the Colegio de México in Mexico City.