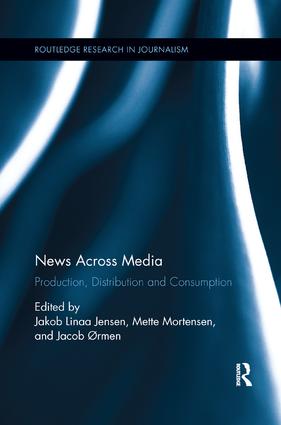 News production, distribution and consumption are in rapidly changing due to the rise of new media. This book examines how these processes become more and more interrelated through logics of dissemination, sharing and co-production. These changes have the potential to affect the criteria of newsworthiness as well as existing power structures and relations within the fields of journalism and agenda setting. The book discusses changing logics of production, from citizens’ as well as journalists’ perspectives, examines distribution and sharing as a link between but also an intrinsic part of production and consumption, and addresses the changing logics of consumption. Contributors place such changes in a historical perspective and outline challenges and future research agendas.

Jakob Linaa Jensen is Head of Research for Social Media at the Danish School of Media and Journalism. He has been Associate Professor of Media Studies at Aarhus University for nine years. He has published three monographs, three edited volumes, and more than 30 international journal articles. His research interests include political communication, the public sphere, social media, Internet politics, the sociology of the Internet, and the cognitive affordances of new media.

Mette Mortensen is Associate Professor in the Department of Media, Cognition and Communication at the University of Copenhagen, Denmark

Jacob Ørmen is a Ph.D. Candidate in the Department of Media, Cognition and Communication at the University of Copenhagen, Denmark