News of Baltimore
Race, Rage and the City 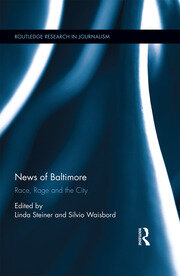 News of Baltimore: Race, Rage and the City

This book examines how the media approached long-standing and long-simmering issues of race, class, violence, and social responsibility in Baltimore during the demonstrations, violence, and public debate in the spring of 2015. Contributors take Baltimore to be an important place, symbol, and marker, though the issues are certainly not unique to Baltimore: they have crucial implications for contemporary journalism in the U.S. These events prompt several questions: How well did journalism do, in Baltimore, nearby and nationally, in explaining the endemic issues besetting Baltimore? What might have been done differently? What is the responsibility of journalists to anticipate and cover these problems? How should they cover social problems in urban areas? What do the answers to such questions suggest about how journalists should in future cover such problems?


1. News of Baltimore: Journalism and public expression about a city’s problems

Part I. News and the Politics of Place

2. Renewing the Lease: How News Characterizations of Baltimore Realigned White Reign of US Cities

3. Local news framing of Baltimore as a segregated market

4. The sociological eye in the news: Covering West Baltimore in the aftermath of the death of Freddie Gray

5. Order in Baltimore? On Place-Frames in US Journalism

6. It’s not a pretty picture’: Visualizing the Baltimore crisis on social media

7. Black agency in the production of counter-narratives of police brutality.

8. The Black Press and Baltimore: The continuing importance of African American journalism during urban uprisings

9. Who Killed Freddie Gray?: The Video that Started It All

10. Historical discontinuities in news coverage of the Baltimore 2015 riots and the 1965 Watts riots

11. Journalists as victims and perpetrators of violence

12. Who speaks for the "real" Baltimore?: How journalists understood their authority and ability to represent "place" during the 2015 unrest

Linda Steiner is Professor in the Philip Merrill College of Journalism at the University of Maryland, USA

Silvio Waisbord is Professor in the School of Media and Public Affairs at The George Washington University, USA