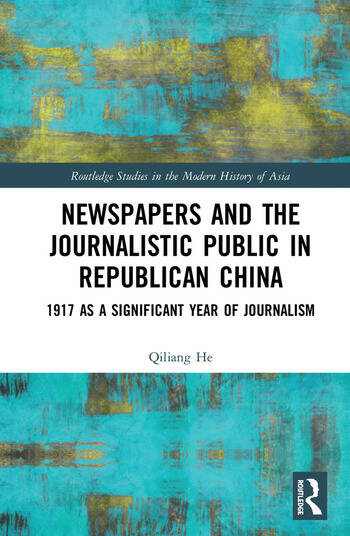 Newspapers and the Journalistic Public in Republican China: 1917 as a Significant Year of Journalism

Offering an entirely new approach to understanding China’s journalism history, this book covers the Chinese periodical press in the first half of the twentieth century.

By focusing on five cases, either occurring in or in relation to the year 1917, this book emphasizes the protean nature of the newspaper and seeks to challenge a press historiography which suggests modern Chinese newspapers were produced and consumed with clear agendas of popularizing enlightenment, modernist, and revolutionary concepts. Instead, this book contends that such a historiography, which is premised on the classification of newspapers along the lines of their functions, overlooks the opaqueness of the Chinese press in the early twentieth century.

Analyzing modern Chinese history through the lens of the newspaper, this book presents an interdisciplinary and international approach to studying mass communications. As such, this book will be useful to students and scholars of Chinese history, journalism, and Asian Studies more generally.

Introduction Part I 1917: Hu Zhengzhi, Dagong bao, and Literati cum Political Commentators 1. Between Literati and Journalists: Hu Zhengzhi and Dagong bao in the Late 1920s Part II 1917: Missouri-style Journalism Education and Liberals in Republican China 2. From Missouri to Shanghai: Maurice E. Votaw and the Transplantation of American Journalism Education to China in the Republican Times 3. Between Liberalism and Censorship: Ma Xingye and the Central Daily News, the 1920s-1940s Part III 1917: Xiaobao, Public Sphere, and News Network 4. The Birth of a Republic: The 1917 Courtesan Election and the Rise of a Public Sphere in the Xiaobao Press 5. The Murder of Lianying: News, News Network, and Modernity in 1920s Shanghai Afterword: From the Use of the Newspaper to the Use of the Internet

Qiliang He is Associate Professor of History at Illinois State University. He has published several books, including Feminism, Women’s Agency, and Communication—The Case of Huang-Lu Elopement (2018) and Gilded Voices: Economics, Politics, and Storytelling in the Yangzi Delta since 1949 (2012).