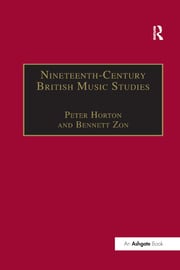 Selected from papers given at the third biennial conference on Music in Nineteenth-Century Britain, this volume, in common with its two predecessors, reflects the interdisciplinary character of the topic. The introductory essay by Julian Rushton foregrounds some of the questions that are key to this area of study: what is the nineteenth century? what is British music? and did London influence the continent? The essays which follow are divided into broad thematic groups covering aspects of gender, church music, national identity, and local and national institutions. This collection illustrates that while nineteenth-century British music studies is still in its infancy as a field of research, it is one that is burgeoning and contributing to our understanding of British social and cultural life of the period.

Contents: Introduction; Learning in London, Julian Rushton; Issues of gender: 'Leadership of fashion in musical thought': the importance of Rosa Newmarch in the context of turn-of-the-century British styles of music appreciation, Charlotte Purkis; Hym(n)ing: music and masculinity in the early Victorian church, Grant Olwage; The construction of a cultural icon: the case of Jenny Lind, George Biddlecombe; Church music: 'Hark an awful voice is sounding': redefining the English Catholic hymn repertory through The Westminster Hymnal of 1912, Thomas Muir; Ancient and modern in the work of Sir John Stainer, Nicholas Temperley; '...the highest point up to that time reached by the combination of Hebrew and Christian sentiment in music', Peter Horton; National identity: 'Unfurl the flag and Federate': flags as a representation of patriotism and nationalism in Australian Federation songs, 1880-1906, Peter Campbell; English national identity and the comic operas of Gilbert and Sullivan, Derek Scott; Singing the songs of Scotland: the German musician Johann Rupprecht DÃ¼rrner and musial life in 19th-century Edinburgh, Barbara Eichner; National and local institutions: Another string to his bow: the composer conducts, Duncan Barker; Vincent Novello and the Philharmonic Society of London, Fiona Palmer; The Oxford commemorations and 19th-century British festival culture, Susan Wollenberg; One equal music: the emergence of the Royal College of Music, Giles Brightwell; The family von Glehn, Valerie Langfield; Index.