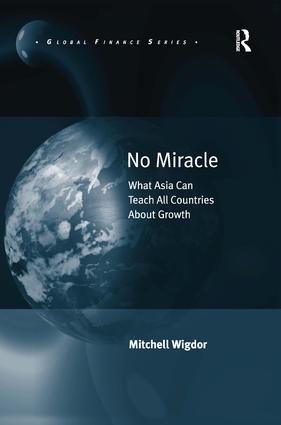 What Asia Can Teach All Countries About Growth, 1st Edition

’A country’s development prospects are increasingly viewed as being dependent upon the quality of its institutions, but little practical guidance has been offered in the institutional literature on development about which institutions are important, or how to build them when they are lacking. Illustrated by groundbreaking case studies of efforts by Singapore and Malaysia to bridge the digital divide between rich and poor countries, this book significantly advances our understanding of the process of economic development and the challenges of institution-building that this entails through a masterful and highly readable study that stands at the crossroads of law, economics, and public policy.’ Michael Trebilcock, University of Toronto, Canada 'The strength of this book is not ground-breaking empirical research but the use of existing studies to forward a clear and sensible argument. Theoretically, it contributes by revealing the pitfalls of NIE’s abstract thinking about institutions, and by demonstrating the usefulness of a clearer an workable definition. Furthermore, the study contributes empirically to the developmental state literature by concentrating on ICT (use)… the book should certainly be read by scholars and practitioners that are interested in the weaknesses of the prevailing NIE approach to institutional change, have an interest in comparative work on Southeast Asia’s economic transformation, or have a special interest in ICT, institutions, and economic growth.' Journal of Southeast Asian Economies

Mitchell Wigdor is a lawyer and business advisor with over twenty years experience in international corporate transactions with a focus on Southeast Asia. He is a graduate of Harvard, the London School of Economics, McGill and the University of Toronto, where he earned his doctorate and is an Adjunct Professor of Law.

The intensifying globalisation of the twenty-first century has brought a myriad of new managerial and political challenges for governing international finance. The return of synchronous global slowdown, mounting developed country debt, and new economy volatility have overturned established economic certainties. Proliferating financial crises, transnational terrorism, currency consolidation, and increasing demands that international finance should better serve public goods such as social and environmental security have all arisen to compound the problem. The new public and private international institutions that are emerging to govern global finance have only just begun to comprehend and respond to this new world. Embracing international financial flows and foreign direct investment, in both the private and public sector dimensions, this series focuses on the challenges and opportunities faced by firms, national governments, and international institutions, and their roles in creating a new system of global finance.