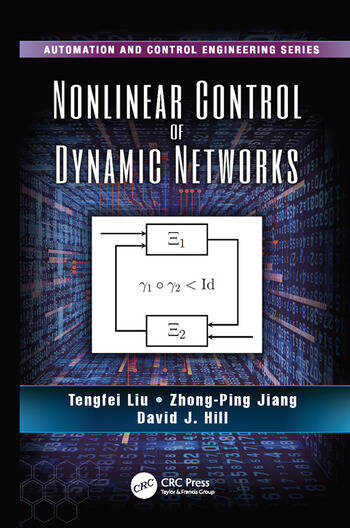 Delivering a systematic review of the nonlinear small-gain theorems, the text:

Based on the authors’ recent research, Nonlinear Control of Dynamic Networks provides a unified framework for robust, quantized, and distributed control under information constraints. Suggesting avenues for further exploration, the book encourages readers to take into consideration more communication and networking issues in control designs to better handle the arising challenges.

Dr. Tengfei Liu holds a BE in automation and ME in control theory and engineering from the South China University of Technology, Guangzhou, as well as a Ph.D in engineering from the Australian National University, Acton, Canberra. He is a visiting assistant professor at the Polytechnic Institute of New York University, Brooklyn, USA. His current research interests include stability theory and robust nonlinear, quantized, and distributed control and their applications in mechanical, power, and transportation systems. Dr. Liu, with Prof. Zhong-Ping Jiang and Prof. David J. Hill, received the Guan Zhao-Zhi Best Paper Award at the 2011 Chinese Control Conference.

Prof. Zhong-Ping Jiang holds a BS in mathematics from the University of Wuhan, China; MS in statistics from the University of Paris XI, France; and Ph.D in automatic control and mathematics from the Ecole des Mines de Paris, France. Currently, he is full professor of electrical and computer engineering at New York University, Brooklyn, USA. His research interests include stability theory, robust and adaptive nonlinear control, and adaptive dynamic programming and their applications to underactuated mechanical systems, communication networks, multi-agent systems, smart grids, and neuroscience. An IEEE and IFAC fellow, he has coauthored two books and edited several publications.