Nonlinear Science and Warfare
Chaos, complexity and the U.S. military in the information age 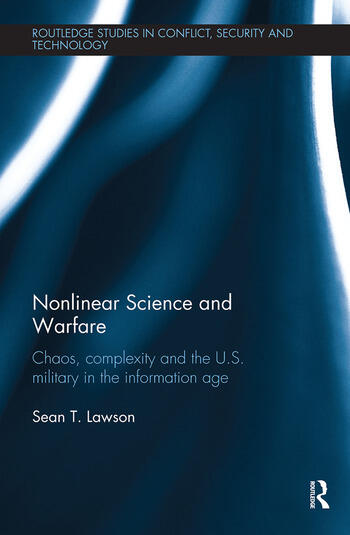 Nonlinear Science and Warfare: Chaos, complexity and the U.S. military in the information age

This book examines the United States military’s use of concepts from non-linear science, such as chaos and complexity theory, in its efforts to theorise information-age warfare.

Over the past three decades, the US defence community has shown an increasing interest in learning lessons from the non-linear sciences. Theories, strategies, and doctrines of warfare that have guided the conduct of US forces in recent conflicts have been substantially influenced by ideas borrowed from non-linear science, including manoeuvre warfare, network-centric warfare, and counterinsurgency.

This book accounts for the uses that the US military has made of non-linear science by examining the long-standing historical relationship between the natural sciences and Western militaries. It identifies concepts and metaphors borrowed from natural science as a key formative factor behind the development of military theory, strategy, and doctrine. In doing so, Nonlinear Science and Warfare not only improves our understanding of the relationship between military professional identity, professional military education, and changes in technology, but also provides important insights into the evolving nature of conflict in the Information Age.

This book will be of much interest to students of strategic studies, military science, US foreign policy, technology and war, and security studies.

1. The Enlistment of Nonlinear Science into U.S. Military Discourse: An Introduction  2. Science in the Western Military Tradition: Enlightenment to WWII  3. The Birth of Big Military Science: The Emergence of and Battle over the Systems Sciences  4. Doing Things the Same or Differently: Post-Vietnam Military Reform and the Emergence of an Information Age Theory of War  5. A Pudding with a Theme: The Enlistment of Nonlinear Science and the Emergence of Network-Centric Warfare  6. From Fourth-Generation Warfare to Global Insurgency: Complexity in the Wake of Operation Iraqi Freedom  7. After Action Report and Lessons Learned

Sean T. Lawson is Assistant Professor in the Department of Communication at the University of Utah, and has a PhD in Science and Technology Studies.