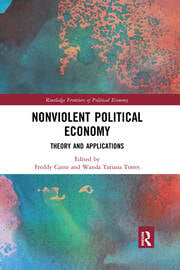 Nonviolent Political Economy offers a set of theoretical solutions and practical guidelines to build an economy of nonviolence which implies a social state of peacefulness, involving minimal violence and minimal destruction of nature.

The book provides renewed reflections on heterodox economics, ecological economics, anthropology, Buddhism, Gandhianism, disarmament, and business ethics, as well as innovative initiatives such as Blue Frontiers. It also sets out feasible solutions to rebuild countries that have suffered prolonged conflicts such as Syria, Iraq and Kurdistan. Bringing together authors from around the world, this collection includes new perspectives on the abolition of profit; disarmament; obliteration of the consumer society; expansion of collective property; Buddhist and Gandhian economies; small-scale and artisanal production, the increasing use of clean energies; a gradual reduction in the human population; political processes closer to direct and radical democracy, and anarchy.

Discussing cutting-edge developments, this book provides valuable tools to build alternatives to the prevailing models of (violent) political economy. It will be of great interest to a public of critical citizens, students and researchers from a range of disciplines and backgrounds, and all those seeking to understand the fundamental concepts of nonviolent political economy.

Introductory Chapter: Nonviolent Political Economy: A Research and Teaching Agenda.  PART I A critique of conventional and violent economy.  1. Money, credit and interest in light of unconventional perspective.  2. The economic nature of man disputed – Anthropology and the "homo oeconomicus".  PART II Self-organized collective action and preservation of commons.  3. Emergent collective action: complexifying the world.  4. Self-Organized Collective Action in the Floating Island Project.  5. Buds in the capitalist desert. Emerging socio-economic forms that are changing the world.  PART III Ecological economy, political ecology and degrowth.  6. Sustainable consumption and ecological sufficiency: discourses and power relations.  7. Holistic peace: A new paradigm for business.  PART IV Gandhian and Buddhist political economy.  8. Gandhi, economics and the new story.  9. Buddhist principles for a nonviolent economy.  PART V Disarmament, post-military systems of defense and transition towards a nonviolent social order.  10. Civilian-based defense systems: leveraging economic power to fulfill security treaty obligations.  11. Systemic Violence in Syria and the Usefulness of Political Economy.  12. How to break the spell? Sources of violence and conflict in an oil-rent based economy. A case study of Iraq and the autonomous region of Kurdistan

Freddy Cante is a Full Professor at the School of Political Science, Government and International Relations, at Universidad del Rosario, Colombia. He is a founding member of the International Consortium for Research on Violence and of the interdisciplinary group JANUS, for the study of peace and conflicts. His research focuses on welfare economics, public choice, social choice, collective action, nonviolent political action, and in the political economy of nonviolence

is a Political Scientist and Internationalist from Universidad del Rosario, Colombia. As a Chevening scholar, she is a current candidate for a Masters of Science in Global Politics at The London School of Economics and Political Science. She is also a former researcher at the Regional Center for Strategic Security Studies (CREES), at the National War College in Bogota, Republic of Colombia and an International Advisor to the Command of the National Colombian Army