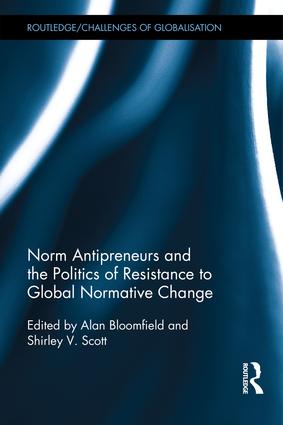 Norm Antipreneurs and the Politics of Resistance to Global Normative Change

Over recent decades International Relations scholars have investigated norm dynamics processes at some length, with the ‘norm entrepreneur’ concept having become a common reference point in the literature. The focus on norm entrepreneurs has, however, resulted in a bias towards investigating the agents and processes of successful normative change.

This book challenges this inherent bias by explicitly focusing on those who resist normative change - norm ‘antipreneurs’. The utility of the norm antipreneur concept is explored through a series of case studies encompassing a range of issue areas and contributed by a mix of well-known and emergent scholars of norm dynamics. In examining the complexity of norm resistance, particular attention is paid to the nature and intent of the actors involved in norm-contestation, the sites and processes of resistance, the strategies and tactics antipreneurs deploy to defend the values and interests they perceive to be threatened by the entrepreneurs, and whether it is the entrepreneurs or the antipreneurs who enjoy greater inherent advantages.

This text will therefore be of interest to scholars and students of International Relations, International Law, Political Science, Sociology and History.

2. Resisting the Responsibility to Protect

3. Resisting the Ban on Cluster Munitions

4. Resistance to the Emergent Norm to Advance Progress Towards the Complete Elimination of Nuclear Weapons

5. Rival Networks and the Conflict over Assassination/ Targeted Killing

7. Resisting Japan’s Promotion of a Norm of Sustainable Whaling

8. Resisting the Norm of Climate Security

12. To Boldly Go Where No Country has gone before: U.S. Norm Antipreneurism and the Weaponization of Outer Space

14. Norm Entrepreneurs and Antipreneurs: chalk and cheese, or two faces of the same coin?

Shirley V. Scott is Professor of International Relations at the School of Social Sciences, University of New South Wales, Australia.