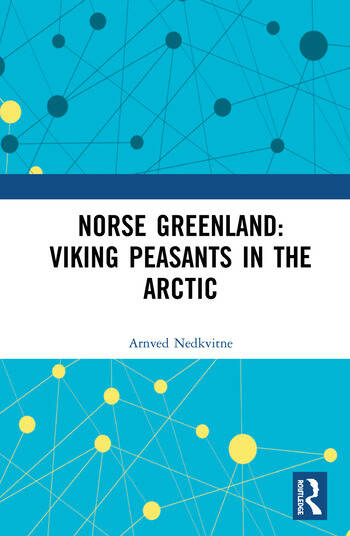 How could a community of 2000–3000 Viking peasants survive in Arctic Greenland for 430 years (ca. 985–1415), and why did they finally disappear? European agriculture in an Arctic environment encountered serious ecological challenges. The Norse peasants faced these challenges by adapting agricultural practices they had learned from the Atlantic and North Sea coast of Norway.

Norse Greenland was the stepping stone for the Europeans who first discovered America and settled briefly in Newfoundland ca. AD 1000. The community had a global significance which surpassed its modest size.

In the last decades scholars have been nearly unanimous in emphasising that long-term climatic and environmental changes created a situation where Norse agriculture was no longer sustainable and the community was ruined. A secondary hypothesis has focused on ethnic confrontations between Norse peasants and Inuit hunters. In the last decades ethnic violence has been on the rise in Eastern Europe, the Middle East and parts of Africa. In some cases it has degenerated into ethnic cleansing. This has strengthened the interest in ethnic violence in past societies. Challenging traditional hypotheses is a source of progress in all science. The present book does this on the basis of relevant written and archaeological material respecting the methodology of both sciences.

The university tradition enters Norse Greenland archaeology from the 1970-ies

Natural sciences in Norse Greenland scholarship from the 1970-ies

The present dominance of the ecological model

THE INITIAL SETTLEMENT IN AD 985/6

1 The Icelandic sagas as historical sources

Who wrote the Vinland sagas and for what purpose?

Categories of sagas which are relevant for Norse Greenland

How reliable was the oral tradition on which the saga authors built?

Sagas used as "narratives" or "remnants"

When did they go?

Were the first immigrants Norwegians or Icelanders?

The chieftain and his clients

Was the Western settlement organised differently from the Eastern?

How did they name their ethnic group?

The Norse narrative tradition on Greenland

2 Violence in a pre-state society

The sense of honour

Were feuds less common on Greenland than on Iceland?

Was there a Greenland law?

Legal proceedings at the Gardar Thing

disputes in practice were settled

5 Ties to the Norwegian king before 1261

Collective obligations to the Norwegian crown before 1261?

Were individual Greenlanders members of the king’s hird?

6 Attempts to organise a state administration after 1261

The courts of justice

The royal manors at Foss and Hvalsey

A state which failed its subjects

The Norwegian king and the Christianisation of Greenland

Bishops on Greenland before 1124

Power in the Greenland church before 1124

The number of parish churches at population maximum

How many parish churches remained ca. 1360?

How often did the Greenlanders attend mass in their parish church?

Who owned the parish churches?

The parish church as centre for the diffusion of literacy

The parish as framework for social life and mentalities

Did the bishops live and work on Greenland?

The Gardar diocese and the archbishop in Nidaros

The Gardar diocese and the pope

6 The supernatural and the natural world

A theoretical interest in the natural world

The church organisation after the bishops had left

Laymen’s religious practices in their homes

How important were imports to the Norse Greenlanders?

Walrus tusks as raw material for objects of art

The Norse Greenlanders’ "nordrseta" in the Disco region

Small boats for use in the fjords

Driftwood as raw material in boatbuilding

Were ships and boats built on Norse Greenland?

Bergen – the commercial centre of the Norse realm

Those who failed to reach their destination

6 The political framework for trade and shipping

The hypothesis about "the royal monopoly ship"

Milk from goats and sheep

Conclusions and sources of error

4 Hunting and fishing as flexible supplements

Hunting and fishing open to all?

Reindeer –the most attractive game

Hunting expeditions to the east coast

Cod and other sea fishes

Char and other fishes in lakes and rivers

How important was fish for the Norse Greenlanders?

5 Did the quality of the diet decline?

From terrestrial to marine food in the diet?

Was the Norsemen’s "marine food" fish or seal?

From cattle to sheep and goats?

Who exploited Greenland’s resources most efficiently?

How exposed were Inuit to starvation?

Fear of being killed

2 Norse encounters with Inuit from beginning to end

Did the Inuit exterminate Dorset?

How did the Norse defend themselves?

When did the Western Settlement cease to exist?

When did the Eastern Settlement cease to exist?

Inuit memories of a vanished society

Was the end of the Eastern Settlement violent?

Was the end preceded by a slow population decline?

3 "We found a rich land, but are not destined to enjoy it"

Arnved Nedkvitne is Professor Emeritus of Medieval History from the universities of Trondheim and Oslo. His main field of study has been pre-modern Norwegian social and economic organisation. Relevant monographs include: The Peasant Economy of the Atlantic and North Sea Coast of Norway 1500–1730 (Oslo 1988, translation of the Norwegian title), Lay Belief in Norse Society (Copenhagen 2009) and The German Hansa and Bergen 1100-1600 (Cologne 2014).

'What happened to the Norse people? A widespread hypothesis is that climate change drove them away. But in [this] new book, the Norwegian medieval historian Arnved Nedkvitne reaches a far more bloody and inconvenient conclusion about the lost people: that it was the Inuit who moved down the coast and killed them' [translation from original Danish] - Anne Knudsen, Weekendavisen.

‘While conclusive determination of the exact cause of the ultimate demise remains elusive, the book makes a valuable large-scale contribution through the successful embedding of the Norse Greenlanders in greater Norse political, economic and social identities.’ – The Economic History Review (72: 3).