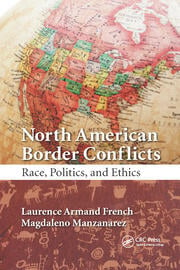 North American Border Conflicts: Race, Politics, and Ethics adds to the current discussion on class, race, ethnic, and sectarian divides, not only within the United States but throughout the Americas in general. The book explores the phenomenon of border challenges throughout the world, particularly the current increase in population migration in the America, Europe, Asia, the Middle East, and Africa, which has been linked to human trafficking and many other causes of human suffering. North American Border Conflicts takes students through the rich, sad history of border conflict on this continent.

Aboriginals and their pre-Columbian boundaries

The Acadian Expulsion: The roots of Manifest Destiny, Ethnic Cleansing and Cultural Genocide

Chapter 3 The Emerging United States and its expansionist mandate

Prelude to the U.S. Civil War: Annexation of Texas

Louis Riel and the Indian/Métis Rebellions

Turbulence in Mexico – the road to Revolution

Harsh Treatment of the Villista Prisoners

USA and its "Indian Problem:" Changing boundaries and identities

Laurence Armand French was born in New Hampshire, with grandparents originally from Canada. He enlisted in the United States Marine Corps when he was 17 and went to college as a disabled veteran. He earned his BA, MA, and Ph.D. in sociology/social psychology from the University of New Hampshire; a second MA from Western New Mexico University; and a second Ph.D. in cultural psychology from the University of Nebraska-Lincoln. He is a licensed clinical psychologist and has worked closely with Dr. Magdaleno Manzanarez on North American border issues.

Magdaleno Manzanarez was born in Mexico and "adopted" into a family in northern California’s wine country. He received his AA from Santa Rosa Junior College; his BA from the Universidad de las Americans in Puebla, Mexico; his MA from Sonoma State University; and his Ph.D. from Northern Arizona University. He is a tenured professor of political science and history and the first Vice President for External Affairs at Western New Mexico University. He sits on numerous boards including the Board of Trustee – Gila Regional Medical Center. He has published and presented papers nationally and internationally on border issues, notably those relevant to the Americas. He co-authored NAFTA & Neocolonialism: Comparative Criminal, Human, & Social Justice with Laurence Armans French.