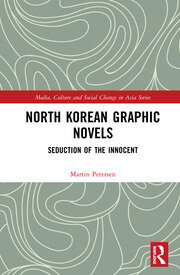 Introduction: Seduction of the innocent? Kurimchaek as entertainment, education, harmful media, political propaganda and beyond

Part One: History, media and regime

Chapter One: A short history of North Korea and kurimchaek

Chapter Three: Father, Mother and Son: One family, one nation, one medium

Part Two: Seduction of the reader

Chapter Four: A society in crisis? From The Arduous March to a New Deal

Chapter Five: The downfall of a model citizen? Family background as plot tension and policy discord

Chapter Six: Sleepless in the DPRK: Graphic negotiations of ‘family’ in The True Identity of ‘Pear Blossom’

Part Three: Reading for the reader

Final panel: Seduction of the innocent?