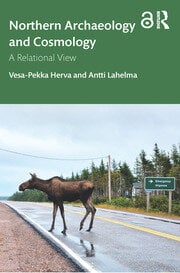 In its analysis of the archaeologies and histories of the northern fringe of Europe, this book provides a focus on animistic–shamanistic cosmologies and the associated human–environment relations from the Neolithic to modern times. The North has fascinated Europeans throughout history, as an enchanted world of natural and supernatural marvels: a land of light and dark, of northern lights and the midnight sun, of witches and magic and of riches ranging from amber to oil. Northern lands conflate fantasies and realities.

Rich archaeological, historical, ethnographic and folkloric materials combine in this book with cutting-edge theoretical perspectives drawn from relational ontologies and epistemologies, producing a fresh approach to the prehistory and history of a region that is pivotal to understanding Europe-wide processes, such as Neolithization and modernization. This book examines the mythical and actual northern worlds, with northern relational modes of perceiving and engaging with the world on the one hand and the ‘place’ of the North in European culture on the other.

This book is an indispensable read for scholars of archaeology, anthropology, cultural studies and folklore in northern Europe, as well as researchers interested in how the North is intertwined with developments in the broader European and Eurasian world. It provides a deep-time understanding of globally topical issues and conflicting interests, as expressed by debates and controversies around Arctic resources, nature preservation and indigenous rights.

The North and the world

Relationality, spirituality and the richness of reality

Spirituality and magic in the northern world

Relationality and the northern world

Time, temporality and the longue durée

A brief outline of the Fennoscandian past

The structure of the book

A race to the Arctic

The world inside the rock

Crystal cavities and other marvels of the Underworld

Cavities and recent folklore in the North

Disciplining and ordering of the North

The enduring allure of minerals and the Underworld

Dwellings, people and the cosmos in the North

The introduction of the house

Houses and the changing relationship with the underworld

Clay work as a means of restructuring human-environment relations

Living in an inspirited world

The forest in northern landscapes and mindscapes

Humans and animals in the north

Sceptres of the shaman?

The Bear – the ‘Golden King of the Forest’

Chapter 5: Coastal landscapes and the sea

Living with the sea

The temporality of Baltic coastal landscapes

Coastal mazes in the North

The mystery object from a Lapland bog

Water and the Otherworld in a northern context

Travelling as a spirit fish

Boats for the dead

The real and mythical rivers

The ‘trader kingdom’ of the birkarls

Birds as guides and soul-birds

Chapter 9: The sun, light and fire

People of the Sun

The marriage of fire and earth

Fire and the hearth in northern cultures

Strange lights in the Northern Sky

A world full of life

The North and the South

Vesa-Pekka Herva is a professor of archaeology at the University of Oulu, Finland. He has studied various aspects of material culture, human–environment relations, cosmology and heritage in north-eastern Europe from the Neolithic to modern times.

Antti Lahelma is a senior lecturer in archaeology at the University of Helsinki, Finland. His core expertise lies in the study of prehistoric identity, cultural production and worldview, particularly in the northern circumpolar area.

Herva and Lahelma take us on a magical tour through the North; along the way, we meet rock crystals, forest bears, clay figurines, sunken boats and migratory birds among a host of other beings. This is no textbook on the prehistory of Fennoscandia, rather an account of how specific relational ontologies in the far north of Europe are manifest in the material world during the 11,000 years of human settlement in the area. Drawing on archaeology, folklore, history and ethnography, the authors let us see this history through a perspective that ‘takes animism seriously’, approaching this world through three cosmological realms of land, sea and sky. It is a highly original approach and one that deals with a region that is paradoxically both marginal and yet central to our understandings of the European past and present. If we have never been modern, this is emphatically true of the far north as this book makes clear, where the divisions between rationality and spirituality, humans and nature have never made sense. Not 11,000 years ago and not now.

This is a deeply original work from two noted experts on the complex spiritualities of the North, bringing their long experience of Finnish anthropology to a wider audience and in a broader geographical context. With its innovative focus on land, sea and sky, issues of environmental interaction take centre stage, but always set against the relational Northern thought-worlds of humans and animals. Here we meet blue elks and spirit fish, the Devil’s swans, and the marriage of fire and earth, alongside a host of others in what the authors rightly call ‘a world full of life’. The extensive subject matter is always rigorously controlled, the case studies sensitive and well chosen, and all combined in a thrilling combination of landscape, metaphysics, communication and subsistence that presents a genuinely new perspective on the ecology of the Northern peoples. This is must for anyone interested in Northern anthropologies, circumpolar belief and shamanism, and arctic archaeologies.