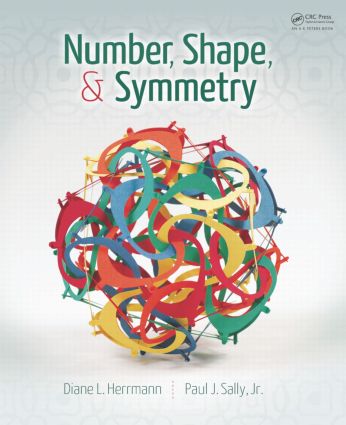 Through a careful treatment of number theory and geometry, Number, Shape, & Symmetry: An Introduction to Number Theory, Geometry, and Group Theory helps readers understand serious mathematical ideas and proofs. Classroom-tested, the book draws on the authors’ successful work with undergraduate students at the University of Chicago, seventh to tenth grade mathematically talented students in the University of Chicago’s Young Scholars Program, and elementary public school teachers in the Seminars for Endorsement in Science and Mathematics Education (SESAME).

The first half of the book focuses on number theory, beginning with the rules of arithmetic (axioms for the integers). The authors then present all the basic ideas and applications of divisibility, primes, and modular arithmetic. They also introduce the abstract notion of a group and include numerous examples. The final topics on number theory consist of rational numbers, real numbers, and ideas about infinity.

The book is suitable for pre-service or in-service training for elementary school teachers, general education mathematics or math for liberal arts undergraduate-level courses, and enrichment activities for high school students or math clubs.

"This beautifully produced book shows how number theory and geometry are essential components to understanding mathematics, with emphasis on teaching and learning such topics. The presentation is excellent and the approach to logic and proofs exemplary. … The book accomplishes the rare feat of presenting some real mathematics in a clear and accessible manner, thereby showing some of the most fundamental ideas of mathematics. It is an engaging text offering the opportunity to a beginner to learn and savor the many ideas involved, and it is also a good resource for readers interested in exploring such ideas. … It is suitable for school teachers and their more able students, particularly those who want enrichment activities for school mathematical societies. It is also an excellent text for liberal arts students at university, and perhaps even for students in science and engineering. Thus, students already familiar with topics such as calculus and differential equations will find the book an enjoyable read to complement what they are used to."

"Well-rounded approaches to logic and proofs have been achieved in Number, Shape, & Symmetry. … The proofs in this book guide the student from simple ideas … to more advanced ventures … It is good to see the arithmetic developed in detail from the fundamental axioms so that students have a clear understanding of each consequence. It is also good that the authors do not take for granted how to solve equations … The text has a nice, natural build-up in difficulty of problems. … Diane L. Herrmann and Paul J. Sally, Jr., have dedicated a great deal of time to writing the text. … Each section is written to be manageable for students to learn, with just the correct amount of content. When I was reading the text, I thought it was my own personal professor who was not only teaching and presenting material, but was guiding me through each step of the lesson through clear examples, as if presented in a face-to-face class. … On the college level, this is a great book to use as either a primary or supplementary book for a number theory class."

"All budding mathematicians should have the opportunity to savour this marvelously engaging book. The authors bring to the text an extensive background working with students and have mastered the fine art of both motivating and delighting them with mathematics. Their experience is evident on every page: creative practice problems draw the reader into the discussion, while frequent examples and detailed diagrams keep each section lively and appealing. Herrmann and Sally have carefully charted a course that takes the reader through number theory, introductory group theory, and geometry, with an emphasis on symmetries in the latter two subjects. The result is a labour of love that should inspire young minds for years to come."

—Sam Vandervelde, author of Bridge to Higher Mathematics and coordinator of the Mandelbrot Competition

"Number, Shape, & Symmetry accomplishes the rare feat of presenting real and deep mathematics in a clear and accessible manner. This book distills the beauty of some of the most fundamental ideas of mathematics and is a terrific resource for anyone interested in exploring these subjects."

The Beginnings of Number Theory

Consequences of the Rules of Arithmetic

The Division and Euclidean Algorithms

The Euclidean Algorithm and the Greatest Common Divisor

The Fundamental Theorem of Arithmetic

Variations on a Theme

Congruences and Arithmetic of Residue Classes

Groups and Other Structures

Days of the Week

How Many Real Numbers?

Introduction to Geometry and Symmetry

Polygons and Their Construction

Polygons and Their Angles

Symmetric Motions of the Triangle

Symmetric Motions of the Square

Even More Economy of Notation

Variations on a Theme: Other Polyhedra

Graphs and Their Complements

Tessellating with a Single Shape

Variations on a Theme: Polyominoes

The Golden Ratio and Fibonacci Numbers

Practice Problem Solutions and Hints as well as Exercises appear at the end of each chapter.

Diane L. Herrmann is a senior lecturer and associate director of undergraduate studies in mathematics at the University of Chicago. Dr. Herrmann is a member of the American Mathematical Society, Mathematical Association of America, Association for Women in Mathematics, Physical Sciences Collegiate Division Governing Committee, and Society for Values in Higher Education. She is also involved with the University of Chicago’s Young Scholars Program, Summer Research Opportunity Program (SROP), and Seminars for Elementary Specialists and Mathematics Educators (SESAME).

Paul J. Sally, Jr. is a professor and director of undergraduate studies in mathematics at the University of Chicago, where he has directed the Young Scholars Program for mathematically talented 7-12 grade students. Dr. Sally also founded SESAME, a staff development program for elementary public school teachers in Chicago. He is a member of the U.S. Steering Committee for the Third International Mathematics and Science Study (TIMSS) and has served as Chairman of the Board of Trustees for the American Mathematical Society.