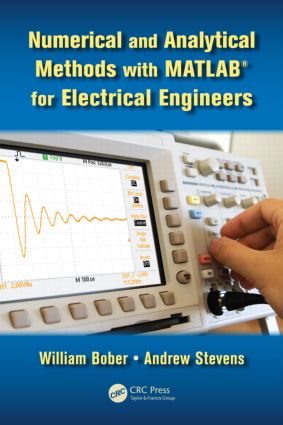 Numerical and Analytical Methods with MATLAB for Electrical Engineers

Exploring the numerical methods that electrical engineers use for design analysis and testing, this book comprises standalone chapters outlining a course that also introduces students to computational methods and programming skills, using MATLAB as the programming environment. Helping engineering students to develop a feel for structural programming—not just button-pushing with a software program—the illustrative examples and extensive assignments in this resource enable them to develop the necessary skills and then apply them to practical electrical engineering problems and cases.

"… I like the organization of the book and especially the early focus on matrix fundamentals … use of examples is excellent. …The end-of chapter problems are good … presents some excellent frameworks for computational methods— students should be able to build their programs more effectively by understanding the core components and following the directions…"

Conventions in This Book

Constructing a Program in MATLAB®

Working with Functions of a Vector

Roots of Algebraic and Transcendental Equations

Solution of a Tri-Diagonal System of Linear Equations

Curve Fitting with the Exponential Function

Creating a Model in Simulink

Tips for Constructing and Running Models

Using the Mux and Fcn Blocks

Using the Relay and Switch Blocks

received his bachelor’s degree from Massachusetts Institute of Technology, his master’s degree from the University of Pennsylvania, and his doctorate from Columbia University, all in electrical engineering. He did his Ph.D. thesis work at IBM Research in the area of integrated circuit design for high-speed optical networks. While at Columbia, he lectured a course in the core undergraduate curriculum and won the IEEE Solid-State Circuits Fellowship. He has held R&D positions at AT&T Bell Laboratories in the development of T-carrier multiplexer systems and at Argonne National Laboratory in the design of radiation-hardened integrated circuits for colliding beam detectors. Since 2001, he has been president of Electrical Science, an engineering consulting firm specializing in electrical hardware and software.