Objectification
On the Difference between Sex and Sexism 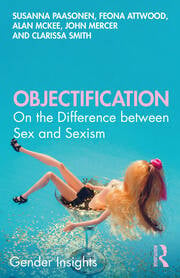 Objectification: On the Difference between Sex and Sexism

This is a concise and accessible introduction into the concept of objectification, one of the most frequently recurring terms in both academic and media debates on the gendered politics of contemporary culture, and core to critiquing the social positions of sex and sexism.

Objectification is an issue of media representation and everyday experiences alike. Central to theories of film spectatorship, beauty fashion and sex, objectification is connected to the harassment and discrimination of women, to the sexualization of culture and the pressing presence of body norms within media. This concise guidebook traces the history of the term’s emergence and its use in a variety of contexts such as debates about sexualization and the male gaze, and its mobilization in connection with the body, selfies and pornography, as well as in feminist activism.

It will be an essential introduction for undergraduate and postgraduate students in Gender Studies, Media Studies, Sociology, Cultural Studies or Visual Arts.

Chapter One: What counts as objectification?

Chapter Two: Male gaze and the politics of representation

Chapter Three: Radical feminism and the objectification of women

Chapter Six: What to do with sexualized culture?

Chapter Seven: Beyond the binary

Susanna Paasonen is Professor of Media Studies at University of Turku, Finland. With an interest in studies of sexuality, networked media and affect, she is the Principal Investigator of both the Academy of Finland research project "Sexuality and Play in Media Culture" and the Strategic Research Council funded consortium, "Intimacy in Data-Driven Culture". Examples of her publications include Who’s Laughing Now? Feminist Tactics in Social Media (MITP, forthcoming, with Jenny Sundén), NSFW: Sex, Humor and Risk in Social Media (MITP, 2019, with Kylie Jarrett and Ben Light), Many Splendored Things: Thinking Sex and Play (Goldsmiths Press, 2018) and Carnal Resonance: Affect and Online Pornography (MITP, 2011).

Feona Attwood is the co-editor of Sexualities and founding co-editor of Porn Studies. Her research focuses on the changing place and significance of gender and sex and their representation in contemporary society. It examines the ways in which sexual practices and representations are caught up in wider debates around bodies, media and technologies, and the emerging centrality of new technologies in conceptions of gender and sexuality. She is the author of Sex Media (Wiley, 2018), co-editor of The Routledge Companion to Media, Sex and Sexuality (Routledge, 2017) and Controversial Images: Media Representations on the Edge (Palgrave Macmillan, 2012) and editor of Mainstreaming Sex: The Sexualization of Western Culture (I.B. Tauris, 2009).

Alan McKee is an expert on entertainment and healthy sexual development. He holds an Australian Research Council Discovery grant entitled "Pornography’s Effects on Audiences: Explaining Contradictory Research Data". He recently completed a Wellcome Grant entitled "Investigating Mediated Sex and Young People’s Health and Well-being" and an ARC Linkage grant with True (previously Family Planning Queensland) to investigate the use of vulgar comedy to provide information about healthy sexual development to young men. He was co-editor of the Girlfriend Guide to Life and co-author of Pornography: Structures Agency and Performance (Polity, 2015). He has published on healthy sexual development, and entertainment education for healthy sexuality in journals, including the Archives of Sexual Behavior, the International Journal of Sexual Health, the Journal of Sex Research and Sex Education.

"Authored by a team of internationally respected scholars, whose research has shaped many of the current debates in gender and sexuality studies, Objectification is one of the first sustained studies to consider the subtle differences between sexualised representation and objectification arguing that, although these concepts may overlap, they are not the same thing. Addressing topics ranging from selfie culture to contemporary trans rights, Objectification makes a timely intervention into media and cultural studies. Written in an accessible style, which is free from academic jargon, this book will be important reading for both academic researchers and students who are new to the subject area."