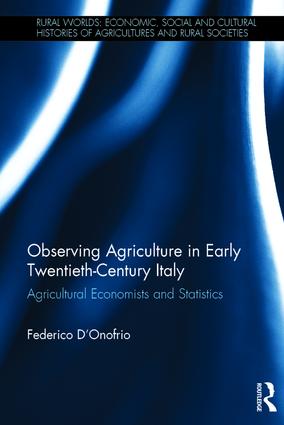 Agricultural Economists in Early Twentieth-Century Italy describes how Italian agricultural economists collected information about the economy of Italy, between the Giolittian and the Fascist era. The book carefully describes three main forms of economic observation: enquiries, statistics, and farm surveys. For each of these forms of observation, the main participants to the investigation are discussed with their respective agendas, alongside the purposes of the investigation, and its practical constraints. This work introduces the concept of "stakeholder statistics", and stresses the two-way relation between the observer and the observed in the co-production of observational knowledge. Practices of observation developed together with agricultural economics as a discipline and a profession. The study of forms of investigation therefore shed light on the constitution of a coherent and self-conscious group of agricultural economists in Italy, and the scientific and methodological alliances they forged with agricultural economists elsewhere in Europe. Thanks to ambitious research projects, Ghino Valenti in the Giolittian period, and Arrigo Serpieri, after the First World War, led the transformation of Italian agricultural economists from agents of estate owners, to social and economic experts in the service of the Italian state. The group of agricultural economists who gathered around Serpieri played an important role in supplying the ideology of the agricultural elites with economic content, especially after the First World War, along lines that resemble the development of agrarian ideologies in other countries of Central Europe. This work discusses how observation entered the political debate on agricultural policies of the Fascist regime, namely the so-called Ruralismo.

Economic, Social and Cultural Histories of Agricultures and Rural Societies

We like to forget that agriculture is one of the core human activities. In historic societies most people lived in the countryside: a high, if falling proportion of the population were engaged in the production and processing of foodstuffs. The possession of land was a key form of wealth: it brought not only income from tenants but prestige, access to a rural lifestyle and often political power. Nor could government ever be disinterested in the countryside, whether to maintain urban food supply, as a source of taxation, or to maintain social peace. Increasingly it managed every aspect of the countryside. Agriculture itself and the social relations within the countryside were in constant flux as farmers reacted to new or changing opportunities, and landlords sought to maintain or increase their incomes. Moreover, urban attitudes to - and representation of - the landscape and its inhabitants were constantly shifting.

These questions of competition and change, production, power and perception are the primary themes of the series. It looks at change and competition in the countryside: social relations within it and between urban and rural societies. The series offers a forum for the publication of the best work on all of these issues, straddling the economic, social and cultural, concentrating on the rural history of Britain and Ireland, Europe and its colonial empires, and North America over the past millennium.