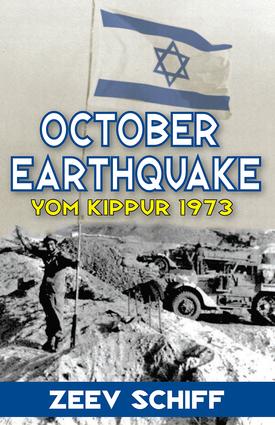 October Earthquake presents a chronological account of the days surrounding the Day of Atonement (Yom Kippur) War, along with the significant military and political events of each day of the conflict. Zeev Schiff's comments on Israel's exaggerated self-confidence, the hopelessness of Israeli leadership, the intelligence failure, the concept of the Bar Lev Line, the role of the air force, and the preparedness of the Arab army are interspersed throughout.

Rather than judging and awarding "grades" to the parties involved in the war, this work bases itself on authentic source materials, such as recordings of command discussions during the battles, and documents. Many of the details included are not found elsewhere. The author skillfully weaves the recollections and accounts of many participants and commentators into a coherent narrative that brings to life the war's events.

Although written largely from the perspective of Israelis, October Earthquake reviews political, diplomatic, and military events in Egypt that set the stage for the war. In the postscript, Schiff also explores key lessons for Israel from the Yom Kippur War, which ended its sense of invincibility and complacency, despite Israel's impressive victories on the battlefield. Winner of the Sokolov Prize, Israel's highest journalism award, this book should be read by all foreign policy specialists, historians, and anyone interested in the Middle East.