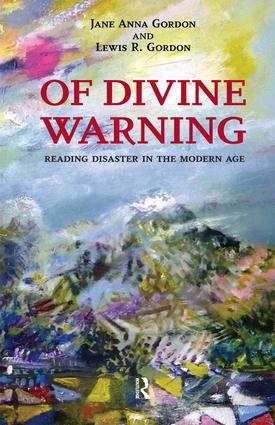 This book offers a theory of disaster in modern and contemporary society and its impact on the construction of social and political life. The theory is premised upon what the authors call "the sign continuum," where disaster spreads across society through efforts to evade social responsibility for its causes and consequences. Phenomena generated by such efforts include the social manifestation of monstrosity (disastrous people and other forms of living things) and an emerging antipolitics in an effort to assert rule and order. A crucial development is the attack on speech, a fundamental feature of political life, as manifested by the increased expectations of categories of people whose containment calls for shunning and silence.

"Readers may find this compact book (120 pages, excluding notes and bibliography) a challenging read as it employs complex arguments and research from a variety of academic fields like cultural studies, history, philosophy, and political science. However, I found its difficulty balanced well by its discussion of entertaining contemporary popular cultural topics and issues."

"Since the publication of Roland Barthes Mythology (1957) no one has attempted with equal rigor, erudition, creativity and elegance, to unveil the politics of current events through the signs and the monsters of popular imagination. . . . The argument is not just a tour-de-force. It is a radical shift in the geography of reasoning, argued with the calm and serenity of intellectual mastery."