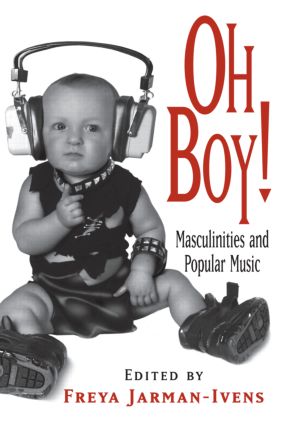 From Muddy Waters to Mick Jagger, Elvis to Freddie Mercury, Jeff Buckley to Justin Timberlake, masculinity in popular music has been an issue explored by performers, critics, and audiences. From the dominance of the blues singer over his "woman" to the sensitive singer/songwriter, popular music artists have adopted various gendered personae in a search for new forms of expression. Sometimes these roles shift as the singer ages, attitudes change, or new challenges on the pop scene arise; other times, the persona hardens into a shell-like mask that the performer struggles to escape.

Oh Boy! Masculinities and Popular Music is the first serious study of how forms of masculinity are negotiated, constructed, represented and addressed across a range of popular music texts and practices. Written by a group of internationally recognized popular music scholars—including Sheila Whiteley, Richard Middleton, and Judith Halberstam—these essays study the concept of masculinity in performance and appearance, and how both male and female artists have engaged with notions of masculinity in popular music.

"Freya Jarman-Ivens and her fellow contributors offer a fresh and imaginative take on masculinity in popular music. This forward-looking book may well provide a model for future work in identity politics." --Kiera, Galway, Notes

"This well-written, meticulously edited book should serve as a springboard for research on this subject for years to come. Highly recommended." --CHOICE

"… Jarman-Ivens’ collection contains a series of thoughtful, well-written articles that investigate masculine identity construction in a number of different popular music genres. … This anthology is a must for any scholar’s library that focuses on the cultural production and social positioning of masculinity in contemporary society, standing as a benchmark collection exploring masculinities in their variety of expression in the world of popular music." --Meryl Krieger, Journal of Folklore Research

Introduction 1. Which Freddie? Constructions of Masculinity in Freddie Mercury and Justin Hawkins 2. Negotiating Masculinity in an Indonesian Pop Song 3: Moshpit Menace and Masculine Mayhem 4. To See Their Father’s Eyes 5. Mum’s the Word 6. The Sing-song of Undead Labor 7. A Walking Open Wound 8. Don’t Cry, Daddy 9. Queer Voices and Musical Genders 10. (Un)Justified 11. Not With You But Of You 12. Some Of Us Can Only Live In Songs Of Love and Trouble

Freya Jarman-Ivens is a lecturer in music at the University of Liverpool. She received her PhD from the University of Newcastle in 2006, and her thesis explored ways in whcih identity is fragmented in late twentieth-century popular music, especially through the use of the voice. Her research interests include queer theory and performativity, psychoanalytic theory, and discourses of technology and musical production. Dr. Jarman-Ivens works on a wide range of musical material, including easy listening, alternative rock, and late nineteenth- and early twentieth-century opera. Her teaching ranges from popular music analysis to the musical construction of character in the Austro-German operatic canon.