Old and Dirty Gods
Religion, Antisemitism, and the Origins of Psychoanalysis 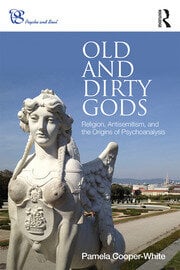 Old and Dirty Gods: Religion, Antisemitism, and the Origins of Psychoanalysis

Freud’s collection of antiquities—his "old and dirty gods"—stood as silent witnesses to the early analysts’ paradoxical fascination and hostility toward religion. Pamela Cooper-White argues that antisemitism, reaching back centuries before the Holocaust, and the acute perspective from the margins that it engendered among the first analysts, stands at the very origins of psychoanalytic theory and practice.

The core insight of psychoanalytic thought— that there is always more beneath the surface appearances of reality, and that this "more" is among other things affective, memory-laden and psychological—cannot fail to have had something to do with the experiences of the first Jewish analysts in their position of marginality and oppression in Habsburg-Catholic Vienna of the 20th century. The book concludes with some parallels between the decades leading to the Holocaust and the current political situation in the U.S. and Europe, and their implications for psychoanalytic practice today.

Covering Pfister, Reik, Rank, and Spielrein as well as Freud, Cooper-White sets out how the first analysts’ position as Europe’s religious and racial "Other" shaped the development of psychoanalysis, and how these tensions continue to affect psychoanalysis today. Old and Dirty Gods will be of great interest to psychoanalysts as well as religious studies scholars.

Pamela Cooper-White is Christiane Brooks Johnson Professor of Psychology and Religion at Union Theological Seminary, New York, and the 2013-14 Fulbright-Freud Scholar of Psychoanalysis in Vienna. She has authored six previous books including Braided Selves: Collected Essays on Multiplicity, God, and Persons; and Schoenberg and the God Idea: The Opera Moses und Aron.

"Pamela Cooper-White finally closes a research gap and offers her readers an illuminating volume which fully elaborates the complexity of religious topics which appeared in the discussions and writings of the members of Sigmund Freud’s Wednesday Night Psychological Society. One does not only get a sense of these wide-ranging religious and interdisciplinary topics, but also an extremely interesting insight into the (also unconscious) dynamics and structures of the very first psychoanalytic organisation characterized by a mix of orthodoxy and creativity, of conformity and diversity. What is more, this thorough and always transparent book also sheds light on the overdetermined sociocultural context of Vienna at the turn of the century to the Nazi takeover, pointing out the eminent – and still effective in Austria – reality of Antisemitism."-Daniela Finzi, research director at the Sigmund Freud Museum, Vienna.

"A stunning achievement. Combines detailed historical research, psychoanalytic insight, and original conclusions. A must read for anyone concerned about the history of psychoanalysis, turn of the century Vienna, or a more complex understanding of the relationship between religion and psychoanalysis. Shows how early psychoanalytic theorizing and practices were shaped by discussions of religion and the surrounding climate of Austrian anti-Semitism. The concluding chapter has important insights into the way psychoanalysis developed in the United States. Worthy of a prize."-James W. Jones, Psy.D., Ph.D., Th.D., Distinguished Professor Emeritus, Rutgers University.

"At a time in history when there has been a resurgence of right-wing, xenophobic, anti-immigrant, and nationalistic, and even racial-purity movements, both in Europe and the United States, Pamela Cooper-White’s Old and Dirty Gods is an important historical, moral, and psychological contribution. She enhances our understanding of the origins of psychoanalysis and its tangled interconnection with antisemitism, racism, and immigration. Cooper-White provides a valuable examination of the early analysts around Freud and their relation to religion, and provides a detailed and thorough study of the impact of antisemitism on these early pioneers and on their legacy throughout the ongoing history of psychoanalysis."-Lewis Aron, Ph.D. director, New York University Postdoctoral Program in Psychotherapy & Psychoanalysis.