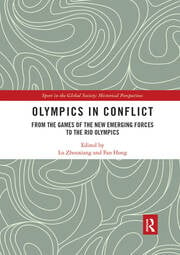 Olympics in Conflict: From the Games of the New Emerging Forces to the Rio Olympics

In the second half of the twentieth century, the Olympics played an important role in the politics of the Cold War and was part of the conflicts between the Capitalist Block, the Socialist Block and Third World countries. The Games of the New Emerging Forces (GANEFO) is one of the best examples of the politicization of sport and the Olympics in the Cold War era. From the 1980s onward, the Olympics has facilitated communication and cooperation between nations in the post–Cold War era and contributed to the formation of a new world order. In August 2016, the Games of the XXXI Olympiad were held in Rio de Janeiro, making Brazil the first South American country to host the Summer Olympics. This was widely regarded as a new landmark event in the history of the modern Olympic movement. From the GANEFO to Rio, the Olympic Games have witnessed the shifting balance in international politics and world economy. This book aims at understanding the transformation of the Olympics over the past decades and tries to explain how the Olympic movement played its part in world politics, the world economy and international relations against the background of the rise of developing countries. The chapters in this book were published as a special issue in The International Journal of the History of Sport.

Introduction 1. Independent Olympic Athletes and the Legitimacy of the International Olympic Committee in Resolving International Conflicts  2. The Legacy of the Games of the New Emerging Forces and Indonesia’s Relationship with the International Olympic Committee  3. ‘The Sole Anti-Democratic Federation in the Entire Olympic Movement’: Early International Association of Athletics Federations Development Initiatives Between Commercialization and Democratization, 1974–1987  4. Sport in Singapore (1945–1948): From Rehabilitation to Olympic Status   5. Olympics, Media and Politics: The First Olympic Ideas in Brazilian Society During the Late Nineteenth and Early Twentieth Centuries   6. The Development of Social Media and its Impact on the Intercultural Exchange of the Olympic Movement, 2004–2012   7. A Game for the Global North: The 2018 Winter Olympic Games in Pyeongchang and South Korean Cultural Politics   8. The Development of the Olympic Narrative in Chinese Elite Sport Discourse from Its First Successful Olympic Bid to the Post-Beijing Games Era   9. Xi Jin-Ping’s World Cup Dreams: From a Major Sports Country to a World Sports Power

Lu Zhouxiang is a Lecturer in Chinese Studies at the National University of Ireland Maynooth. His main research interests are Chinese history, nationalism and China’s sport policy and practice.

Fan Hong is a Professor in Asian Studies at Bangor University, Wales. Her main research interests are in the areas of sociology, politics, cross-cultural studies, sports studies and Asian studies.