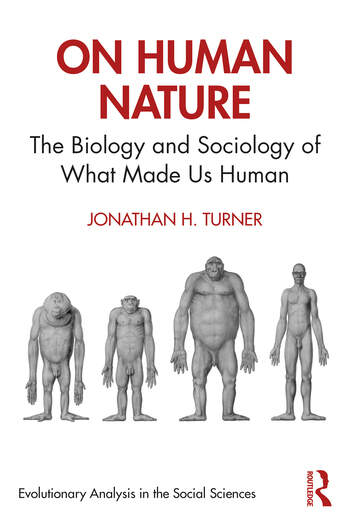 On Human Nature: The Biology and Sociology of What Made Us Human

In this book, Jonathan H. Turner combines sociology, evolutionary biology, cladistic analysis from biology, and comparative neuroanatomy to examine human nature as it was inherited from common ancestors shared by humans and present-day great apes. Selection pressures altered this inherited legacy for the ancestors of humans—termed hominins for being bipedal—and forced greater organization than extant great apes when the hominins moved into open country terrestrial habitats. The effects of these selection pressures increased hominin ancestors’ emotional capacities through greater social and group orientation. This shift, in turn, enabled further selection for a larger brain, articulated speech, and culture along the human line. Turner elaborates human nature as a series of overlapping complexes that are the outcome of the inherited legacy of great apes being fed through the transforming effects of a larger brain, speech, and culture. These complexes, he shows, can be understood as the cognitive complex, the psychological complex, the emotions complex, the interaction complex, and the community complex.

Contents Chapter 1: Human by Nature? Approaches to Understanding Human Nature. Searching for human universals. Darwinian Selection and Biological Analysis. Sociobiology and genic selection. Evolutionary psychology. More purely sociological approaches. What is Human Nature vs. Outcomes of This Nature? Conclusion Chapter 2: Before Humans: Looking Back in Evolutionary Time The Power of Cladistic Analysis. Cladistic Analysis of Great Apes. Monkeys and Great Apes. Why Are Monkeys and Apes So Organizationally Different? The Liabilities of Being a Great Ape. Pre-Adaptations and Behavioral Capacities. Pre-adatptations. Behavioral capacities/propensities. Conclusion. Chapter 3: Why Humans Became the Most Emotional Animals on Earth? Natural Selectin and the Forces of Evolution. Natural Selection and Emotions. Expanding the range of variation of primary emotions. First-order elaborations of primary emotions. The Language of Emotions. Additional pre-adaptations for spoken language. The evolution of speech capacities. Brain growth, second-order elaborations of emotions, spoken language, and culture. Conclusion. Chapter 4: Why and How Did the Human Family Evolve? Community as the Structural Basis of Great-Ape Organization. Community as the natural social form. Low levels of grooming and reliance on cognitive mapping. Life History Characteristics of Great Apes. Mother-Infant Bonds. Lack of A Harem Pattern of Mating. Play Among Young Mammals. The Evolution of The Nuclear Family. The primal pre-kinship ‘horde.’ From horde to the nuclear family. Conclusions Chapter 5: Interpersonal Skills for Species Survival Inherited Capacities for Interaction and Solidarity. Reading face and eyes. Capacities for role-taking and empathizing. Rhythmic synchronization of interaction. Collective emotional effervescence. Seeing Self As An Object. Reciprocity and Calculations of Justice. Exchange and reciprocity. Calculations of justice. The Capacity to Make Attributions. Formation of Fluid and Episodic Hierarchies. Friendship and Fellowship Behaviors. Conclusions. Chapter 6: The Elaboration of Humans’ Inherited Nature The Vulnerability of Hominins and Humans. Separating the Biological from Cultural. Conclusions: Visualizing the Evolved Nature of Humans. Chapter 7: The Evolved Cognitive Complex and Human Nature The Nature of Brain Function during Action and Interaction. Still Foundational Insights into Cognitive Function from Early Theorists. Mind and thinking. Significant symbols, mind, and role taking. Emotions, cognitions, and self. Cognitive capacity, self, emotions, and defense mechanism. Ordering Stocks of Knowledge Used in Interaction. The emotional basis of memory and experience in ordering cognitions. Ordering memories and creating stocks of knowledge at hand. Future/potential salience as an order mechanism. Abstraction and response generalizations at ordering mechanisms. Chunking information ordering mechanism. Gestalt dynamics as ordering mechanisms: congruence-consistency. contrast-conceptions. expectation states. attributions. Conclusion Chapter 8: The Evolved Emotions Complex and Human Nature Brain Growth, Language and Speech, Culture and the Elaboration of Emotions. Emotions and Reflexivity. Emotions and Social Control. Emotions and Self. Emotions and Social Structures. Conclusion: The Emotions Complex. Chapter 9: The Evolved Psychology Complex and Human Nature Need-States to Verify Levels of Identity. Person- or core-identities. Categoric-unit identities. Corporate-unit identities. Role-identities. The loose hierarchy of human identities. Need-States for Positive Exchange Payoffs Perceived as Fair. Need-States for a Sense of Efficacy. Need-States for a Sense of Group Inclusion. Need-States for Cognitive and Emotional Congruence. Need-States for a Sense of Trust. Need-States for Experiencing Positive Emotions. Conclusion: The Evolved Psychology Complex. Chapter 10: The Evolved Interaction Complex and Human Nature Elements of the Evolve Interaction Complex. Evolved capacities for identity formation and the presentation of self: identity-taking and identity-making. The evolved complexity of role-taking and the theory of mind expanded: role-taking and role-making. status-taking and status-making. Structure taking and structure making. culture-taking and culture-making. situation-taking and situation-making. emotion-taking and emotion-making. Framing and interaction: keying and rekeying of frames. Frame-taking and frame-making. Language, rhythmic synchronization, ritualizing, totemizing, and exchange: language and rhythmic synchronization. Shorter-term rituals. Longer-term rituals. totemizing. Exchange. Conclusion: The Evolved Interaction Complex. Chapter 11: The Evolved Community Complex and Human Nature Community as the Basic Organization Unit of Great Apes and Early Hominins. Inherited Traits and Effects of the ‘Elaboration Machine.’ Conclusion: The Elaborated Community Complex. Chapter 12: Human Nature and The Evolution of Mega Societies: Implication for Species and Personal Survival on Earth Human Nature and the ‘Social Gages’ Created by Societal Evolution. Why Do Humans Prefer Modernity? Human Nature and Species Survival. More Misery for Humans, Masquerading as Technological Advancement. What Makes Humans Humane? Bibliography Index

Jonathan Turner is one of few social theorists who cross disciplinary boundaries in a serious way, engaging Biology, Anthropology, Evolution, Genetics, Brain Science, Psychology, and Sociology. Rejecting the tautological logic of the "just-so stories," so often associated with evolutionary work, Turner reveals the labyrinth-like complexity of human nature. Turner is a sure-footed guide through these labyrinths, rendering his insights useful for thinking about a wide variety of social phenomena. Ultimately, Turner's, Human Nature, is a cutting-edge work that should matter to all social scientists.

This remarkable book is both unusually comprehensive and at the same time highly readable. After a slow start, sociology is now being integrated with the findings of evolutionary biology, with Jonathan Turner in the lead. This treatment of human nature and its evolution is powerfully eclectic, using theories and data ranging from primate ethology to theories of emotion to brain science, and includes some pleasant surprises in the form of American Pragmatism and the work of Mead and Cooley. A provocative synthesis.

Jonathan Turner can be counted among the few in American sociology who ask huge questions, master sprawling literatures, and defy the imperialism of strong social constructivism. He takes nature seriously and wants to know what nature means for humanity. This book continues and extends Turner's decades-long project of systematically understanding and explaining foundational concerns about humanity—that is, us, we ourselves. Not everyone will agree with his story, but I commend it as important and fascinating nonetheless. At a time when the authority of science itself is increasingly publicly questioned, Turner admirably models a long-view scholar taking seriously genuinely interdisciplinary science.