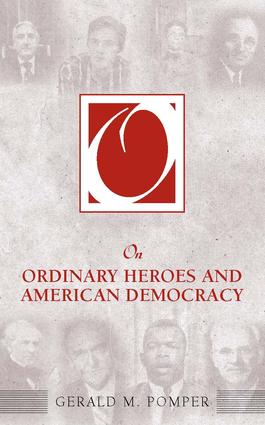 On Ordinary Heroes and American Democracy

True American heroes need not have superhuman abilities nor do they need to act alone. Heroism in a democracy is different from the heroism of myths and legends, writes Gerald Pomper in this original contribution to the literature of U.S. politics. Through the remarkable stories of eight diverse Americans who acted as heroes by "just doing their jobs" during national crises, he offers a provocative definition of heroism and fresh reasons to respect U.S. institutions and the people who work within them. This new paperback edition includes photographs, an introductory chapter on American heroism after 9/11, a survey of the meanings of heroism in U.S. popular culture, and an original concluding theory of "ordinary" heroism.

“Shows how an individual can make a difference, despite the size and scale of politics in an immense nation trying to keep a democracy.”

“A fascinating examination of heroes and the nature of heroism in a democratic society.”

“Pomper’s inspiring book provokes us to think about how American democracy and American political institutions foster the heroism of ordinary people.”

Chapter 1: We Call Them Heroes Chapter 2: Models of American Heroism Chapter 3: Peter Rodino: A Hero of the House Chapter 4: Arthur Watkings: A Hero of the Senate Chapter 5: Harry Truman: A Hero as President Chapter 6: Wayne Justice: A Hero of the Judiciary Chapter 7: Frances Kelsey: A Hero of Bureaucracy Chapter 8: Thurlow Weed: A Hero in Party Politics Chapter 9: Ida Tarbell: A Hero of the Press Chapter 10: John Lewis: A Hero of Social Movements Chapter 11: Ordinary Heroes and American Democracy